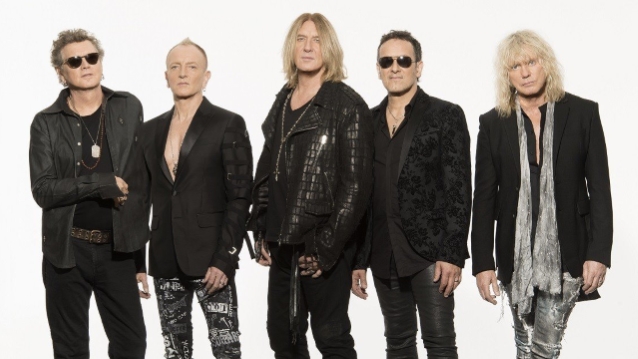 Dave Lawrence of Hawaii Public Radio's "All Things Considered" recently conducted an interview with DEF LEPPARD guitarist Phil Collen. You can listen to the entire chat below. A few excerpts follow (transcribed by BLABBERMOUTH.NET).

On whether DEP LEPPARD has invited musical guests onstage during their live performances:

Phil: "Not really. I mean, usually the songs are pretty complex. We've done a CREDENCE [CLEARWATER REVIVAL] song once and brought Brian May out from QUEEN and [Jon] Bon Jovi and Richie Sambora another time, that was pretty simple. Stuff like 'Photograph' and those songs are very specific and the harmonies and that, we don't want someone messing them up. We traditionally don't do that. Having said that, I just got off the G3 tour with Joe Satriani and John Petrucci and we would have a jam session every night, about half an hour and three songs and we'd invite guitar players. That was amazing, really fun. In DEF LEPPARD, it's a very different structure, if you like. We use backing vocals as an instrument and all of the sudden, you can't just let anyone in on that. It's going to change the dynamic."

On whether his MAN RAZE and DELTA DEEP side-projects allow him to satisfy some of the things he can't do while in DEF LEPPARD:

Phil: "Absolutely, because it doesn't have this structure. Like I said, we have our instruments and that's the backing vocals: Me, Rick Savage [bass] and Vivian Campbell [guitar], we kind of lock in. It's almost spiritual the way we do things. I love it. It's just a very special thing. Yeah, the other bands don't do it. Me and Debbi Blackwell-Cook [DELTA DEEP] we do harmonies all the time, but a lot of the time, we can do it on the fly. On live radio this morning, we were just breaking out a song acoustically. We naturally can do that. With DEF LEPPARD, we have three-part harmonies, very structured. It is like an instrument. We tend not to do that. Yeah, DELTA DEEP and MAN RAZE, we're able to drift off and do a jam thing. Not necessarily an old blues jam, but literally go off on a tangent like THE POLICE used to do, just that whole three-piece and four-piece in DELTA DEEP's case. It's really fun and you can't do that with DEF LEPPARD because it would be like a house of cards, all come tumbling down. [Laughs]"

On drummer Rick Allen still playing drums at a high level with just one arm:

Phil: "What's really cool about it is you do get used to it from a sound point of view. But you never take it for granted. You really go, 'Wow, this is amazing what he's doing!' Then I hear other drummers and go, 'My guy can do that with one arm tied behind his back.' Literally, he can. He does this stuff. He's really worked at it to make it. Again, he consistently pushes it out there like we all do. With him, it's obviously a lot more because he has a physical disability, but he's able to keep getting better. He got a brand-new Yamaha acoustic kit the other day and this thing was a monster and it just sounded incredible. He was playing it and you would never have known that's a drummer with one arm. He has his special kit that's got a bunch of different pedals on it, but when you're on a regular kit, he sounds amazing. The dynamics are just all there. The sound of the snare, a lot of the time, it's how you tune it, but also how you play it. That's what I really dug hearing him play an acoustic kit. Hopefully we'll persuade him to do a couple of songs on this thing, but it was like, 'Whoa, this is great!' I love him hearing play like that. He's a hero. He does just amazing stuff."

On what made him start playing guitar:

Phil: "I thought it was completely out of reach, something like that when you'd hear [LED] ZEPPELIN, [DEEP] PURPLE and all of this stuff, and [Jimi] Hendrix and go 'These guys are gods.' I went to my first show. I was 14, it was DEEP PURPLE, I said 'That's all I want to do.' I pestered my mom and dad, got this guitar. I also got this album, it was called 'The Guitar Album'. It had Roy Buchanan, Jimi Hendrix, Jan Akkerman, Freddie King, Albert King, B.B. King, just everyone on it. There was something about it, it really touched me and I just followed it all the way through, but what was really interesting, I never played slide guitar, but I listened to Joe Walsh, Duane Allman for years. I had an injury, this is about five years ago, my tendon tore off the knuckle. It's kind of like a boxer's knuckle they call it. I was over-training and it just happened, it just went off. I learned to play slide because I was six weeks in a cast and everything, my wrist went all limp, I couldn't do anything, so I learned slide. What was interesting, because of years and years of listening to the stuff, I could pretty much play, when I got the technique I literally went on a Joe Walsh link for ten minutes, he said 'This is how you play slide guitar.' He tuned it up, he put the finger where he said and all of the sudden all the licks were just coming out because I had heard them for years. I was a Ray Cooper fan, Duane Allman and Joe Walsh. The slide stuff almost started immediately, so I think it was something similar with guitar, even the regular guitar. I heard all this stuff; same with singing. You hear all this stuff. I was a huge fan of Aretha Franklin, Stevie Wonder, Paul Rodgers, just blues, soul-oriented stuff and when I did start, I got a little bit of a singing technique on the go and guitar playing, it almost felt like I had been doing it for years because I had been listening to that stuff for years. It was just locking into the tool of that expression. For me, it was guitar and voice. I was surprised I didn't realize that until way later. I think that absolutely has something to do with it, starting so late, but being able to do all this stuff. Kind of earlier on, it was interesting, but if you intellectualize it, that's really what was going on. I heard this stuff and I knew it in my head and could feel it. It was very soulful and everything. From that point, I got to put it out."

A new DEF LEPPARD greatest-hits collection, "The Story So Far - The Best Of" will arrive in stores and online November 30. It will be available in multiple configurations: a 2-CD set comprised of 35 tracks, 1-CD set comprised of 17 tracks, 2-LP vinyl, and digital.