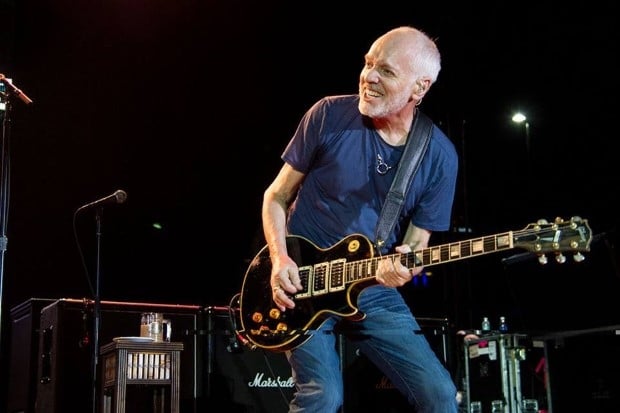 Peter Frampton's fifth solo album, "Frampton Comes Alive!", is one of the Recording Academy's latest inductions to the Grammy Hall Of Fame.

The 2020 Grammy Hall Of Fame inductees range from Neil Diamond's "Sweet Caroline (Good Times Never Seemed So Good)" to Joni Mitchell's "Clouds". The list also features EURYTHMICS' "Sweet Dreams (Are Made Of This)", Elton John's "Tiny Dancer", DEVO's "Q: Are We Not Men? A: We Are Devo!", SWAN SILVERTONES' "Oh Mary Don't You Weep" and PUBLIC ENEMY's "It Takes A Nation Of Millions To Hold Us Back".

"Frampton Comes Alive!" is one of the top-selling live records of all time, with over 17 million copies sold worldwide.

Frampton commented on his album's induction, writing on Twitter: "I received news today that my album, 'Frampton Comes Alive!' has been inducted into the Grammy Hall Of Fame. Thank you so much. I definitely didn't see this coming! What a wonderful honour to be inducted and join so many incredible artists."

This year's additions recognize a diverse range of both single and album recordings at least 25 years old that exhibit qualitative or historical significance. Recordings are reviewed each year by a special member committee comprised of eminent and knowledgeable professionals from all branches of the recording arts, with final approval by the Recording Academy's National Board of Trustees. With 26 new titles, the Hall, now in its 47th year, currently totals 1,114 recordings and is on display at the Grammy Museum.

"Each year it is our distinct privilege to preserve a piece of cultural and music history with our Grammy Hall Of Fame inductions," said Deborah Dugan, president/CEO of the Recording Academy. "We are so honored to welcome these timeless masterpieces to our growing catalog of iconic recordings that serve as a beacon of music excellence and diverse expression that will forever impact and inspire generations of creators."

Eligible recipients will receive an official certificate from the Recording Academy.

I received news today that my album, Frampton Comes Alive! has been inducted into the GRAMMY Hall of Fame. Thank you so much. I definitely didn’t see this coming! What a wonderful honour to be inducted and join so many incredible artists. https://t.co/YFgTQTpoVc