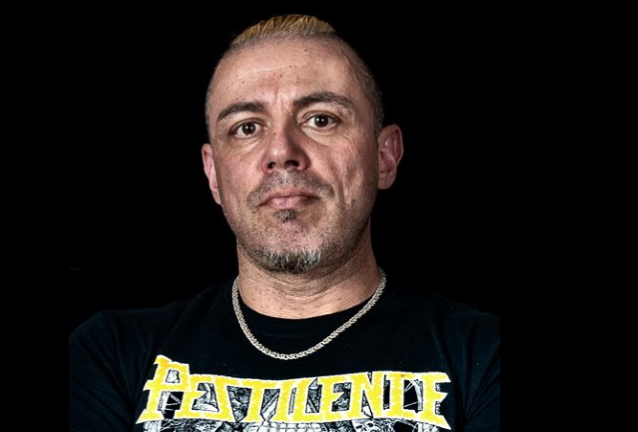 Guitarist Patrick Mameli of long-running Dutch progressive death metallers PESTILENCE spoke to Heavy Culture about the lyrical inspiration for the band's upcoming album, "Exitivm", which is tentatively due in early 2021 through Agonia Records.

He said (see video below): "Most of the time I have a concept for an album, and I just roll with that concept. I always try to be as rational and realistic about it when I study the topics. This time, the topics have to do with mental illness and the way society has been created in the last few years to brainwash people and have people not being individuals anymore but having to think [more like] herds of sheep.

"I mean with this, for example, what is happening right now with the coronavirus," he continued. "There is a state of mass hypnosis where people are just scared — more scared of what is on TV. And if you don't wear the mask, you can contaminate someone else. And you see that the stress level of humanity is becoming very, very high.

"I think that since this corona thing has happened, there is a shift in reality of what is real and what is not real, especially when the media is being used as being the total truth and people eat it like it is the reality.

"When you see kids growing up, they only communicate through their phones; everybody's just watching their phone," Mameli added. "I remember when I was growing up, I was still climbing trees. People don't do that anymore. Now they just look at the screen all the time and they try to find the truth in the screen.

"The new god is technology. And what is behind technology are people that are trying to hypnotize humanity. Look at Facebook. For me, Facebook is nothing but a tool to get PESTILENCE out there. But for people that don't have a band or [something else to promote], it can be more like propaganda and mass hypnosis.

"When you look at Facebook and [Facebook CEO] Mark Zuckerberg, he has been going to trial many, many times where they say he has breached the people's privilege of being private. I mean, just look at it — when you are talking to your girlfriend, to your friend, to your wife about a certain topic, now you open your phone and you see pictures of the topic you have been discussing. That means that this device is nothing more than a spying tool. But if people start to believe that spying tool, we lose the essence of using our eyes, our nose and our mouths for communication.

"[PESTILENCE's 2011 album 'Doctrine'] is the album where I started talking about, 'In manipulation we trust.' This is the reason why I came up with 'Doctrine'. It's a hidden way of telling people, 'Listen up, you have to use your own mind, use your own brain and don't trust platforms like Facebook that use your location to track down where you are.' And even if you turn it off, they still can track you down, they still can use your microphone. And that's when I started to think how the society works nowadays, and this was how my topics started to evolve into what I'm going to talk about on 'Exitivm'. Because 'exitium' is the Latin word for total destruction, and total destruction means the total destruction of society as we know it.

"Our children are going to be living in a world where as the new normal, you accept to wear masks, you accept that what they say on TV is the truth," Patrick said. "So I am really scared for the truth for the youngsters and what's happening. So I think that those things are very important for me to vocalize myself about and express myself in 'Exitivm', because the total destruction is happening right now, and it's happening, and this is a reality.

"I have never been a band talking about zombies, talking about guts and gore and all this stupid, stupid stuff, man. I mean, c'mon. I know the music has to be powerful and the music sometimes is violent, but that's just the music. The mind is the most powerful tool there is, and our mind is being used by an external force that is invisible."

Mameli, who has had a number of his coronavirus-related posts flagged as part of Facebook's efforts to combat false news and misinformation on its platform, also touched upon the subject of cancel culture, saying "everything you say can be used against you."

He said: "The stuff that is happening right now, where the focus is on stuff like 'Black Lives Matter' and Antifa fighting each other, the Trump-Joe Biden rally and all these things that are happening right now, it seems like we know what is happening, but there is nothing we can do about it. And that is the problem — most of the people don't care to get out there anymore and raise their voice because of what other people are gonna say or are gonna do to you. Mankind has become like a political thing. Everything you say can be used against you. So you can't say white person, black person, Hispanic, without people using the racial card. You have to watch out what you say with everything you do, and because the Internet is there, people get banned. I get banned for what I say on Facebook. They take away my pictures, they take away what I say. Some people get scared with this and then they stop protesting what they think is right."

He continued: "I don't know how long we can take this before people don't want this anymore. And then when the racial card is done, then comes the next coronavirus, and if that doesn't work anymore, they're gonna take away your money, because that's what's gonna happen. Everybody's gonna have to take a COVID test. With this test, you can show that you have been vaccinated, and if you are not vaccinated, you cannot travel outside your country. They're wanting total control. And when I say this, people think I'm a conspiracy theorist, which is bullshit. I just see what is happening around us. I see what is happening in not only my country… When my prime minister says I cannot be close to one person — one-and-a-half-meter distance we have to make — and then when I see him with the minister from France, they are practically kissing each other. So what is happening here? Why are we being treated like we are not worth anything, whereas for me now, I'm in a very difficult time, because I'm not allowed to travel and do shows. I'm not allowed to do shows. That means that I can't generate money and live. So, at this point, half a year without money. And this is not just me — a lot of bands have the same problems."

The only mask Mr. Pestilence will wear???

Thanks fact checkers. You ruin democracy for a few bucks from a crook???

Pestilence destroyed Czech Republic. ???No Covid bs here!!! I would like to thank all the guys in the band for this...

SO WHY DO THE RUSSIANS HAVE A VACCINE AND THE REST HAS NOT? WHY ISN'T EVERYONE WORKING TOGETHER? What vaccin will be legal for us??? ALL BS.