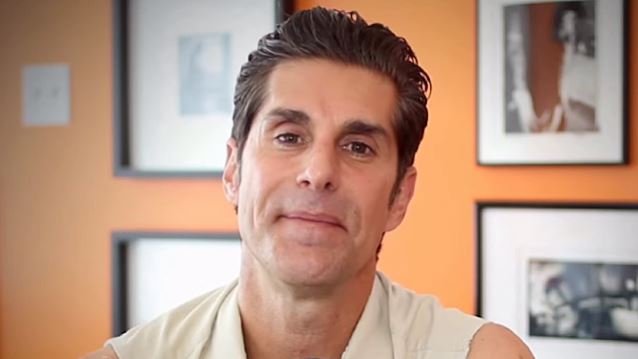 Lollapalooza festival founder and JANE'S ADDICTION frontman Perry Farrell tells RollingStone.com in a new interview that while is "honored" to have METALLICA as one of this year's Lollapalooza headliners, he wasn't always a fan of the band. "I was very angry the first time they played Lollapalooza [in 1996]," he reveals. "I helped create the genre alternative, and alternative was against hair metal, teased-out hair, spandex, bullshit rock music. METALLICA, in my estimation at that time, wasn't my thing. I was into alternative and punk and underground. My friends were Henry Rollins and Gibby Haynes and Ice-T."

Farrell went on to admit that he was "kind of harsh" on METALLICA almost twenty years ago. "[METALLICA was] not the first group that I didn't want to play Lollapalooza, because I have an obligation to my patrons," he said. "I'm all about genuine, authentic, heartfelt, the real deal. So I was not sure about METALLICA back in those days. It's my fucking party and I'll have who I want."

According to Perry, he has learned to appreciate METALLICA in recent years. "I like their music," he says.

This year's edition of Lollapalooza is once again scheduled to take place at Grant Park in Chicago, on July 31, August 1 and August 2. Joining METALLICA and Paul McCartney will be more than 100 other acts.

METALLICA said in a statement, "It's been nearly 20 years since we've been lucky enough to take the stage at Lollapalooza, so we are over the top that we've been asked to play this year at the now annual extravaganza held at Grant Park in Chicago. We'll be hitting the stage on Saturday, August 1st."

McCartney will headline on Friday (July 31), while FLORENCE AND THE MACHINE will do the honors on Sunday (August 2).

METALLICA last appeared on the Lollapalooza bill when it was still a traveling festival. That year's lineup also featured SOUNDGARDEN and the RAMONES.

This summer's show will mark Lollapalooza's 10th year as a destination festival in Chicago.

Lollapalooza was launched in 1991 as a farewell tour for JANE'S ADDICTION.

Farrell and the promoters turned it into a yearly traveling festival and showcase for a wide range of alternative music acts.

The tour's popularity declined later that decade, with the 1997 edition the last for several years.

Lollapalooza resurfaced one more time as a traveling festival in 2003 before morphing into a destination event and making Chicago its permanent home two years later.

There have also been Lollapalooza festivals held in Chile, Argentina and Brazil, with a German version coming this year.