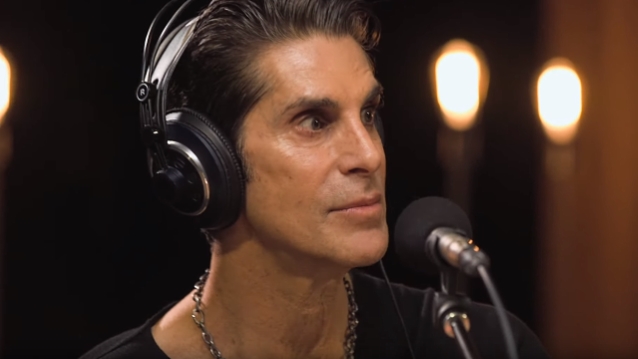 In a recent interview with "Q", the Canadian arts magazine show produced by and airing on CBC Radio One, JANE'S ADDICTION frontman Perry Farrell was asked what the role of artists is in speaking about things and trying to change things if they see problems in the world. He responded (see video below): "Well, we are great messengers, and we have great platforms today to spread the message… But I think there's nothing better… This is why I'm going to the small venues initially [on my current tour], so I can see people eye to eye and soul to soul. You can see me, you know who I am, and you can see exactly what I'm about. There's no photo retouching. It's like a sporting event — this is life or death right here. And if you really want to spread the message, you've gotta do it the oldest way, and that is reach out and touch people and look in their eyes and let them know you."

He added: "This is no time to keep you mouth shut. This is a time when we've gotta express ourselves. The artists need to express themselves and not hold back, because we are all… There's this universal hard drive that contains all of our collective emotions and feelings, and we're all… And then today we have this beautiful thing, the Internet, where we can reach out and quickly say, 'This is going on,' and, 'This is how I feel,' and, 'This is a good thing.'

"So, I think that… the silence? No. Be silent when you're down by a creek and you have a picnic basket near you, so you can hear the crickets. But with all this going on, this insanity, with these rich men trying to just organize and swipe the world away from us, now is not the time to be silent."

Perry recently released the official music video for his latest single, "Pirate Punk Politician". The track, which he previously described as "a good old-fashioned protest song," appears on his latest album, "Kind Heaven", which came out on June 7 via BMG.

In a 2017 interview with Forbes, Farrell slammed President Donald Trump, saying that the billionaire real estate mogul "does not seem to really care about people that are outside of his immediate family or income bracket. I'm starting to make some money in my lifetime and I look at this guy who's our president and I just see the way that he behaves towards people that are less fortunate and I think he's doing it all wrong," he said. "I think that when you make money, you have a moral obligation to give back to the people that need you. I try and figure out why he is the way he is, and you know what I conclude, he lacks certain degree of empathy because he grew up always surrounded and protected and he never had to fight and struggle. So he doesn't understand the feelings of those who have to fight and struggle to survive and for the children to survive. He's never had to go through that, so he has no empathy for it."