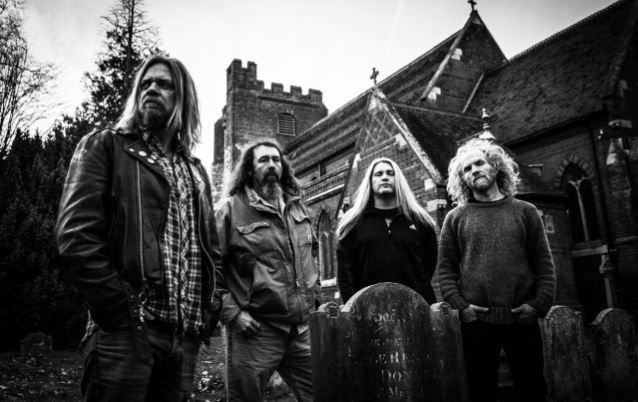 Nuclear Blast Entertainment has announced the signing of the four-piece version of CORROSION OF CONFORMITY — featuring Pepper Keenan on guitar and vocals — to a worldwide deal. The band will enter the studio late this winter/early spring with longtime producer John Custer. Custer has recorded such C.O.C. classics as "Deliverance", "Wiseblood", "America's Volume Dealer" and "In The Arms Of God". The as-yet-untitled-album will mark CORROSION OF CONFORMITY's studio reunion with Keenan and the Pepper-fronted version of C.O.C.'s first full-length record since 2005. A fall 2016 release is expected.

Says Keenan about the new partnership: "To all the C.O.C. fans worldwide, Mike [Dean, bass], Reed [Mullin, drums], Woody [Weatherman, guitar] and I are proud to announce that we are starting our next sonic adventure with Nuclear Blast Entertainment! We are honored and psyched to be a part of the Blasted Family, both professionally and artistically.

"After all these years, it's truly inspiring to reawaken the chemistry that the four of us have. We are seriously fucking with our pants off now! We do not take this journey lightly and cannot wait to return to the studio to drop Ze' Hammer!

"All of this would not be possible without the global support of all you freethinkers and beerdrinkers. Much love and respect and look forward to to seeing you soon."

Monte Conner, president of Nuclear Blast Entertainment, adds: "I love all the incarnations of C.O.C. over the years but the Pepper-fronted version has always been the definitive lineup of the band for me. Ever since hearing Pepper take charge on 1991's 'Vote With A Bullet', I was dying to hear him sing more with the band. This lineup's 1994 debut 'Deliverance', with its signature tracks 'Clean My Wounds' and 'Albatross', was an instant classic and is still one of my all-time favorite albums.

"It has been a long 10 years since their fourth album — the highly underrated 'In The Arms Of God' — and as a fan, I can't wait to hear what these guys come up with next. I know it will be a monster. The fact that it is coming out on Nuclear Blast is very fulfilling for me and many others on the Nuclear Blast team as we finally get to work with one of our favorite bands."

Weatherman told West Michigan's Revue about C.O.C.'s forthcoming album: "With our last record [with Pepper Keenan], [2005's] 'In The Arms Of God' — we want to pick up where that left off. We were on to something there, and then [Hurricane] Katrina happened [in New Orleans, where Keenan is based]. Then the band went on hiatus and we never picked it back up until 2010 when we started doing the three-piece stuff."

Weatherman believes "In The Arms Of God", which featured GALACTIC's Stanton Moore on drums, wasn't promoted properly. "We put a lot of effort into that and it took some doing to get it done," Weatherman said. "But I think it didn't get a fair shake. We got cut off from supporting it."

Keenan played his first full show with CORROSION OF CONFORMITY since 2006 on March 7 at Manchester Academy 2 in Manchester, England.

Speaking about the differences between writing music for CORROSION OF CONFORMITY and DOWN, Keenan told "Maximum Threshold": "The biggest difference with the C.O.C. stuff is that I'm singing, so my brain acts differently towards that writing songs for Phil [Anselmo, DOWN frontman] to sing. It's two different entities. I don't know how I split it in half, but I do it. I just go off the catalyst of what the last C.O.C. record was, which I thought was an extremely strong record. So we're just gonna shoot for that angle. And those guys have got a bunch of great riffs, and it's a different machine."