PEARL JAM, JOURNEY, YES and ELECTRIC LIGHT ORCHESTRA are among the 2017 inductees into the Rock And Roll Hall Of Fame. Also being inducted at next April's ceremony will be folk legend Joan Baez and the late hip-hop star Tupac Shakur. CHIC's Nile Rodgers will be given the Award For Musical Excellence.

The 32nd annual Rock And Roll Hall Of Fame induction ceremony will take place on April 7 at the Barclays Center in Brooklyn, where it will be held for the third time. An edited version will later air on HBO and there will be a radio broadcast on SiriusXM. Ticket details will be announced in January.

"I kind of feel like we were already in with our fans and the amount of records we've sold all over the world," JOURNEY guitarist Neal Schon told Rolling Stone. "I wasn't expecting anything at all. I've learned to be that way. If you don't expect something and it comes, then its good news. I'm honored. I think we're all honored."

Schon said that he hoped former JOURNEY singer Steve Perry will take the stage with the band on the big night. "I would be surprised if it didn't happen," he said. "But I'll deal with it whichever way… I'm going to try and reach out [to Perry], as I've done many times. And [our current singer] Arnel [Pineda] is so gracious. He says, 'Any time he wants to come on and do anything, I'll very gladly step aside and let him sing.'"

Perry's manager said the singer would not be available for interviews, but he did release a very short statement on his behalf: "I'm truly grateful that JOURNEY is being inducted into the Rock And Roll Hall Of Fame."

"What an honor this is for us and all involved with the history of this band," said YES guitarist Steve Howe. "We thank all the YES fans who have been so passionate over the decades, and helped us to keep the flag flying. It is the fans who have constantly demanded our inclusion. They have been heard."

"We look forward to accepting this esteemed award next spring in honor of our fallen brother, Chris Squire, who would have been delighted to see his musical vision finally receive such recognition," added YES drummer Alan White. "We thank everyone who voted for YES. We'll see you soon, Cleveland!"

"YES was like my first girlfriend, to whom I was hopelessly committed," said Bruford. "Despite a couple of wrinkles, I'm glad to hear the old girl is in fine shape."

Kaye added: "I am honored to be included in YES's induction. I am delighted for my friends in the band, and I salute Chris, without whom it would never have happened. Chris would have been so very proud."

In addition to Steve Howe and Alan White, YES's current lineup includes Geoff Downes (keyboards; first joined in 1980), Jon Davison (vocals since 2011) and Billy Sherwood (guitar/keyboards in the 1990s and Chris Squire's choice to take over bass/vocals in 2015).

PEARL JAM guitarist Mike McCready was asked at the 2013 ceremony about his band's chances. "You know, you never want to place any bets on anything," he said. "I'm not a gambler, so I'm not going to try to put any odds on that. But I don't know. I hope so. But you never know. You never know what happens. It could take a while."

PEARL JAM will be the second of the seminal Seattle "grunge" acts — after NIRVANA — to enter the Hall. Two others, SOUNDGARDEN and ALICE IN CHAINS, are also both eligible for induction.

McCready told The Pulse Of Radio he was appreciative of the long career he and the band have had. "When it comes down to it, getting to be 50 years old and looking back at that and going, 'Wow, done all these PEARL JAM records and toured all over the world and played at a thousand-plus shows and got to make a career out of this,' I'm very lucky and I'm aware of that, and I feel grateful that I'm still doing this." 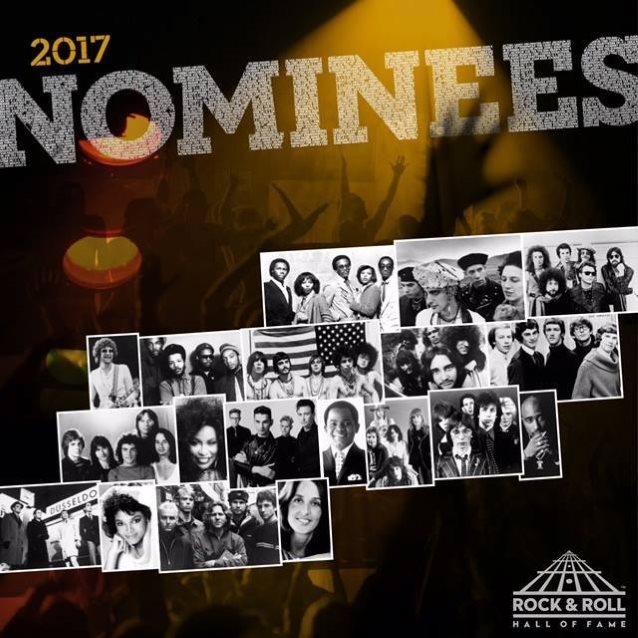