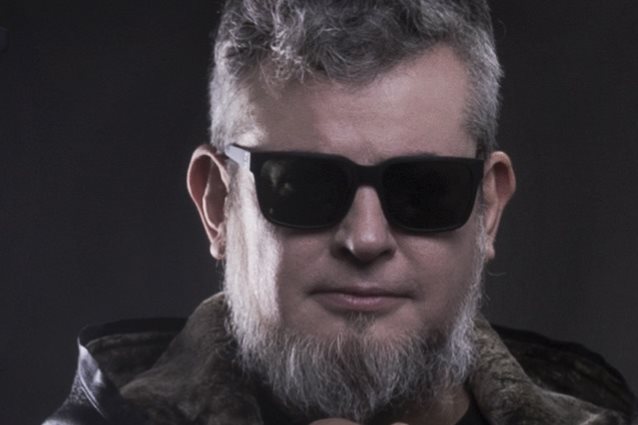 Metal Assault recently conducted an interview with SEPULTURA bassist Paulo Xisto Pinto Jr. You can listen to the full chat below. A few excerpts follow (transcribed by BLABBERMOUTH.NET).

Paulo: "I think it's a very unique record. Everybody is really happy with the final results. I think we achieved and conquered that what we thought since the beginning of the writing process. Everybody is very pleased and a lot of people, at the first listen to it, they were weird about it, but after a few times, the record grows into you."

On whether he's proud of the band's new material:

Paulo: "Definitely. I'm very proud of this new stuff. We already have done the first leg of the 'Machine Messiah' [tour] in Europe and we had a one-hour set with KREATOR. In this one-hour set, we've been playing five new songs from the album. This [North American] tour coming up with TESTAMENT, we're going to have 50 minutes, but I'm pretty sure we're going to be doing the five new songs, I hope, plus we're going to be trying some different ones as well. After that, on the SEPULTURA headlining shows, we're going to add more new songs until we're able to do basically the whole record. [I'm] looking forward to that. It's a new challenge so it's going to be good."

On where he would rank "Machine Messiah" in comparison to the rest of SEPULTURA's catalog:

Paulo: "To me, I think this is the best-sounding record in the past few years. Definitely, with Derrick [Green, vocals], this is the best record so far [in] Derrick's generation. We achieved sound-wise, composing-wise, I think, everything really fits and each song completes each other. We made a very unique record. I'm really enjoying playing these songs live and really enjoy still listening to the record. Sometimes a lot of artists get tired of listening to their own records, but this one is still very fresh and we still have a long way touring-wise. This is the first leg of the American tour. We're only going to have 50 minutes, but I hope we can come back to the United States and do the full set, like we're going to be doing everywhere else around the world."

On the band's relationship with TESTAMENT:

On SEPULTURA's plans after their North American tour with TESTAMENT:

Paulo: "After the six weeks, we're coming back to Brazil for about nine days. We have the launch of the SEPULTURA documentary and we have three shows in São Paulo, then we head back to Europe for the summer festivals. They're still putting together some more tours in Europe and South America. We've been talking [about] Asia as well. So it's going to be a very full year. They've been working on dates right now and see what we can put together and make sure we have a pretty busy [schedule]."

On Derrick Green's development over the years:

Paulo: "Everybody knows it was a hard task for him to do [replacing Max Cavalera]. He's very confident. He's a very talented guy. He's capable of using his voice. Of course, the development as a musician, as a band member, takes years to get experience to play together. That takes you a long stage-time to be comfortable and to really get loose to experiment and to create. At the beginning, I think he was more… everybody was like 'We have to prove that we can do this.' Nowadays, we don't have to prove anything else, in my opinion. The records speak for themselves. I think we achieved a totally different level. Everybody is very comfortable with each other onstage, in the studio, so it's very different, the four of us, we're thinking the same way. We know each other better, stage-wise and a personal level as well. That really helps. It's only time. He's been in the band for 20 years. It's just time."