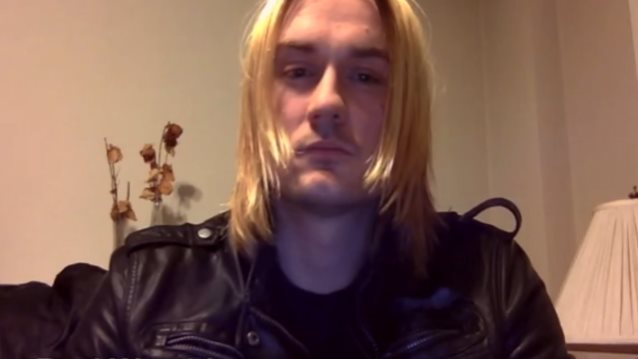 **UPDATE**: After this story was originally published, Paul Wandtke tweeted that it's "false" to say that he learned about his exit from TRIVIUM by reading BLABBERMOUTH.NET. He explained: "All that I meant is that I didn't know who was playing drums. I was informed way before."

Wandtke's latest comments contradict what he told a fan on December 22 — right after the original BLABBERMOUTH.NET story about his rumored departure was first posted. Asked in the comments section below one of his YouTube videos if he would continue playing with TRIVIUM, Paul responded at the time: "yeah totally". The drummer also made it clear in the Rock Feed interview — which was conducted last week — that he only learned "a few days ago" that he was no longer a touring member of TRIVIUM. He added: "It was a mutual decision, you know."

Drummer Paul Wandtke says that he found out via BLABBERMOUTH.NET that was fired from TRIVIUM.

On December 22, BLABBERMOUTH.NET exclusively reported the rumor that TRIVIUM had parted ways with Wandtke and welcomed Alex Bent, a member of BATTLECROSS and DECREPIT BIRTH who previously played with TESTAMENT as the fill-in for that band's longtime drummer Gene Hoglan.

Asked by Rock Feed how his exit from TRIVIUM came about, Paul said (see video below): "Well, it was kind of a surprise to me, but I guess it's kind of like the AVENGED SEVENFOLD situation [with Arin Ilejay], where everything was great at first, everyone was ecstatic, we're all happy. It's kind of like getting married; you go on a honeymoon. After the honeymoon's over, things kind of get weird, and then that's it."

Wandtke went on to say that he was caught completely off guard when BLABBERMOUTH.NET first reported the rumor about his departure from TRIVIUM. "Yeah, I mean, I was," he said. "I was, like, 'What's this? What's Blabbermouth saying today? [Laughs]"

Asked when he was given the official word that his services were no longer required by TRIVIUM, Wandtke said: "Basically, a few days ago, man. It was a mutual decision, you know."

Paul also addressed TRIVIUM frontman Matt Heafy's comment in a recent interview that the band's last three drummers — including Wandtke — were merely "session" musicians, even though Heafy said less than a year ago that Paul was "what we've always been missing."

"I was the first TRIVIUM drummer in over ten years to get some press in magazines, like Modern Drummer," Paul said. "And that is a true statement, that Matt Heafy did say that [about me being what TRIVIUM had always been always missing]. But bottom line, I did come into it in a work-for-hire situation. It makes sense to me what they were doing. If it was my band, I would have done the same thing, because you're taking on a stranger."

Wandtke made his live debut with TRIVIUM on December 5, 2015 at Knotfest in Mexico. A short time later, he appeared in an official promotional photo with the three core members of the band.