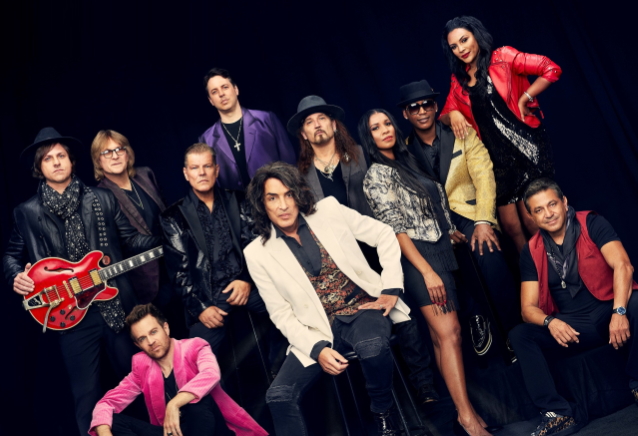 KISS co-founder and frontman, best-selling author and Rock And Roll Hall Of Famer Paul Stanley will release the debut album from his SOUL STATION project on March 19 (postponed from previously announced March 5) via Universal Music Enterprises. A collection of nine classic soul covers and five original tracks, "Now And Then" will feature the band's acclaimed version of THE FIVE STAIRSTEPS' "O-o-h Child" as well as SOUL STATION's take on THE SPINNERS' "Could It Be I'm Falling In Love".

The third single from the album, "I, Oh I", can be streamed below.

Stanley has spent the last few years developing this project close to his heart. SOUL STATION is a band gathering some of today's leading musicians to pay tribute to the greatest artists and songs from the R&B and soul catalog to keep this vital music current. While a surprise to many, Stanley's early pivotal roots in this music has quietly turned this passion into a celebrated touring and recording band. Stanley's 15-piece ensemble group has toured the U.S. and Japan, and recently recorded an album of nine classic soul songs and five new original songs.

Speaking about the new music, Stanley said: "Between us doing some great SOUL STATION shows and starting the album, I started to think that neither the band or the music we love should depend only on the past so I started writing with the goal of seamlessly taking songs into the present. From what a lot of people I respect have told me, that mission was accomplished."

When Stanley conceived SOUL STATION, the group excelled in the live venue setting, playing smaller, intimate clubs — a setting where Paul Stanley would reflect on those classic hits that were his early inspiration, playing the songs with a reverence and respect for how he and the band believe they should be performed and heard.

"Long before I ever heard the great British bands, I grew up listening to Philly Soul, Motown and so much more," he said. "I was lucky to see Otis Redding and Solomon Burke among others. That music and its storytelling gave me strength and hope even in some tough days. The great classics of that era are magical medicine for most and I felt myself drawn back to that era for some sorcery I think we could all use."

The band is augmented by three string players and two horn players of the same stature enabling SOUL STATION's wall of sound to be firmly rooted in the past while staking claim to both the present and future.

"Now And Then" track listing:

Speaking about how the idea for SOUL STATION came about, Paul told Scott Lipps: "I was really lucky, because, before I ever saw [LED] ZEPPELIN or any of the British bands that I grew to love, or the blues bands that I saw, I saw Otis Redding as a kid, I saw Solomon Burke and THE TEMPTATIONS. So that really is the core of what I do. It's not all that I do, but it's in there, and it always has been. SMOKEY [ROBINSON] AND THE MIRACLES; early Stevie Wonder; Philly soul; Kenny Gamble and Leon Huff, all the things that they produced — Thom Bell. So you have THE DELFONICS, STYLISTICS, BLUE MAGIC, THE TEMPS, FOUR TOPS, and on and on. So, for me, that music, unfortunately, has been relegated to becoming samples in somebody's rap songs. Those songs deserve so much more, not only respect, but to be listened to, because when we play those songs live, everybody's faces light up, because they're just great, great songs.

"SOUL STATION is 15 people, and everybody's played with everyone from Smokey to Stevie Wonder to Natalie Cole to TEMPTATIONS, Whitney Houston, and on and on and on," Stanley continued. "And it really is like a family. We hang out at my house and have a great time. But what really bonded us together was this love of that music and wanting to recreate it accurately, respectfully. Even some of those bands, when they wound up playing live, did these uptempo, kind of soulless versions of their own songs. And we're playing those songs the way they're supposed to be, and it's glorious.

"Look, I started doing it selfishly, 'cause I love that music, and to have it surrounding me, and to get to sing those songs, is crazy. And then to also write some new tunes that really marry so well to the old tunes is like writing another page.

"Will it surprise some people? Yeah," Paul added. "But, honestly, I'm not… Somebody said, 'Oh, you're reinventing yourself.' I'm not the champion of blues rock or hard rock or metal or this. I did 'Phantom Of The Opera'. I'm a singer, and I choose to sing whatever I choose to sing at any given time. So, really, honestly, it's as natural for me to sing Philly soul as it is to sing rock. It's just I haven't done it publicly."

Last May, Stanley released a cover version of Smokey Robinson's classic song "Ooo Baby Baby", recorded by SOUL STATION. In a statement accompanying the clip, Stanley said: "These are challenging times. Long before I ever heard the great British bands, I grew up listening to Philly Soul, Motown and so much more. I was lucky to see Otis Redding and Solomon Burke among others. That music and its storytelling gave me strength and hope even in some tough days. The great classics of that era are magical medicine for most and I felt myself drawn back to that era for some sorcery I think we could all use."

In 2019, Stanley told the Real Radio 104.1 radio station that he wanted to wait for the right time to release the SOUL STATION LP. "It really deserves full attention and my full commitment," he explained. "So until we can do great live performances — the band is amazing live — and until we can promote it the way we should, it's just going to simmer."