KISS frontman Paul Stanley has confirmed via Twitter that his much-anticipated autobiography will be released next spring.

During an appearance on the "Sixx Sense" radio show hosted by MÖTLEY CRÜE/SIXX: A.M. bassist Nikki Sixx last November, Stanley, 61, was asked if he has read some of the other rock and roll autobiographies out there and whether he has plans to write a book of his own.

"This will come back to haunt me, because, of course, mine is in the works," Stanley said.

"Autobiographies, for the most part, to me, are like writing a love letter to yourself," he continued. "I mean, George Orwell said that the autobiography is the most outrageous form of fiction. How objective can you be when you are writing about yourself.

"I've seen people around me write books and somehow they're always in the center of everything that happened, they were the one who made it happen. There's been a lot of those books that didn't really interest me much. I thought Duff's [McKagan] book was great. I think a book that just says, 'Gee, aren't I the greatest thing?' And 'I was smarter than everyone else.'…"

Asked how his book will be different from the other rock and roll autobiographies and whether his book will be "a history lesson in music," Stanley said, "Well, everybody will tell you the same thing: 'Well, my book is brutally honest.' It's a history lesson in music, but it's also a history lesson in somebody taking themselves and making themselves into something they weren't — taking a not-so-great deck of cards and winning at poker. So it's good. I think it's terrific. Especially, it's funny, at this point, with the three other guys from the original lineup having written books. It’s kind of like, 'OK, have you all said your piece? OK? Now let me tell you what happened.'"

In a 2007 interview with Australia's TheAge.com.au, Stanley stated about the prospect of writing an autobiography, "Show me anyone who writes about themselves and doesn't find themselves in the center of the universe? I have seen other people's autobiographies and I had some questions about those.

"Tooting my own horn is of no interest to me ... it takes you away from real life. It's a waste and I don't find a need to sing my own praises."

Original KISS drummer Peter Criss' memoir, "Makeup To Breakup: My Life In And Out Of Kiss", landed at position No. 7 on the New York Times "Hardcover Nonfiction" best-sellers list. The book arrived last October via the Simon & Schuster imprint Scribner.

Former KISS guitarist Ace Frehley's book, "No Regrets: A Rock 'N' Roll Memoir", debuted on the New York Times "Hardcover Nonfiction" best sellers list at No. 10. The book, which was described as a look back at Ace's "life of sex, drugs, and rock and roll," arrived on November 1, 2011 via Gallery Books, an imprint of Simon & Schuster. 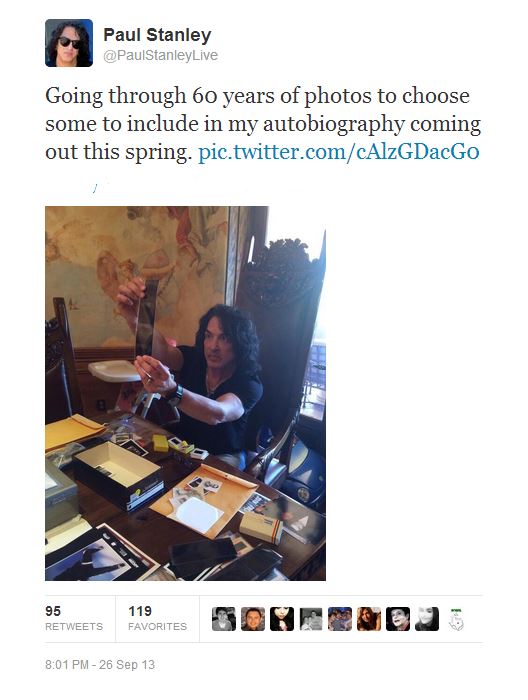