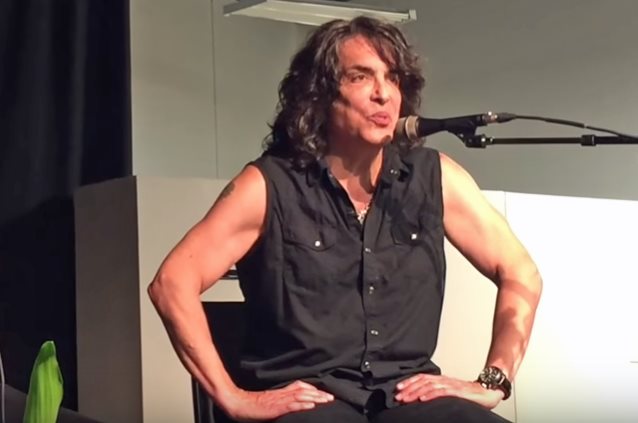 On KISS's decision, in 1983, during the recording of the band's eleventh studio album, "Lick It Up", to remove their makeup and reveal their true faces:

Stanley: "It was great. I mean, I was so ready for it, and the band, really, had reached a point where I think people were listening to us with their eyes instead of their ears, and people were tired of what they were seeing. And plus, we had introduced new characters, and it lost something, because instead of cultivating and nurturing those four characters that were there in the beginning, suddenly we had Turtle Man in the band, or Giraffe Boy. 'Hey, there's the drumming rabbit.' It lost what made it what it was. So we needed to see whether or not we were worthy of continuing. If we couldn't continue without the makeup, then we didn't deserve to continue. So it was kind of trial by fire."

On when he made the decision that removing the makeup was the right thing for KISS to do:

Stanley: "When we were doing 'Creatures [Of The Night]', I wanted to take the makeup off, and understandably, it was much harder for Gene [Simmons, KISS bassist/vocalist], because Gene's persona is so strong. You know, he, more than anybody, I think, is the face of the band, and for him to lose that was frightening. But when 'Creatures' really didn't sell anywhere near what we thought it should, he finally went along with, 'Let's do it.' And sales on the next album were six times what the sales for 'Creatures' were, and I don't think it was anywhere near as good an album."

On his relationship with Gene Simmons today:

Stanley: "Our relationship's never been better. You have to realize we've been together forty-seven years… We live very close to each other, and we give each other a lot of space, just because we've been so fortunate. We've succeeded and been able to give each other the life that fits us. And that doesn't necessarily mean that… I certainly wouldn't want his life, and he wouldn't want mine. We're very fortunate to have KISS, and we're very fortunate to have each other, because the partnership works so well. I'm thrilled."

On whether he cleared the air with Gene Simmons after Stanley publicly apologized for his bandmate's comments about Prince:

Stanley: "We are so, so connected that while that was going on, we never even spoke about it. We are truly family, and Shannon's [Tweed, Gene's wife, who was critical of Stanley for calling out Simmons] part of the family. We're real lucky. I mean, we're lucky to have this many years behind us. And that's why I said, you know, forty-plus years says volumes; we've been together that long. And I thought that he said something that was… It wasn't that it was out of line; it's just I felt that so many people associate the two of us together, I wanted to distance myself from what he was saying. Sometimes he doesn't have a filter, and sometimes he says things that ultimately he comes to regret. But in the meantime, I just thought what he was saying was not at the right time, and it was offensive to somebody's memory, so I said what I said. But it wasn't something to harp on. I made my point, and then it was over."

On the possibility of KISS one day carrying on without any original members, including Stanley and Simmons:

Stanley: "It sounds more sterile and more… It sounds like something that it's really not. But truth be told, I didn't invent the wheel. What I do on stage is a mixture of all the people that inspired me. I don't know what I've done that's truly original; I stole from a lot of good people and mixed it all together. KISS has a forty-year history now and a point of view and how we relate to our audience and how we relate to each other. We sing about self-empowerment and about celebrating being alive — things that are pretty timeless. And once the original band was no more, it just became clear to us that, in some ways, we're much more a sports team. We don't fall into the limitations of other bands, because we're not other bands. So, yeah, at some point, I'd love to see somebody in the band in my place, and it's because I love the band."

On how he would go about finding someone to replace him:

Stanley: "Honestly, I think all the KISS tribute bands are great, but none of them have a good 'Paul.' So I'd like to see somebody who incorporates what I've done with a lot of the things that inspired me. You have to remember, when we go on tour… I mean, the last tour we did was just stadiums in South America and Europe, and nobody in the audience is going, 'Where's so-and-so?' They're there to see KISS. And the people who think, or thought, that the band couldn't exist without the original members are fifty percent wrong now. So, to me, it's just another step. Some people may not understand it, but I do. I'd love to see the band continue. And it's not a matter of a puppet being me; it's somebody who comes in and contributes and adds something new to it while still following the template that's been set."

On whether it's still worth making a new KISS album now that the band already has so many classic songs that everybody knows:

Stanley: "It's only worth doing it if, artistically, you wanna do it. Every time we finish an album, I kind of go, 'Well, that's it.' Whenever we've done an album… When we did 'Sonic Boom', it was because the band was so good that I just thought to not capture the band and do new material would be a shame. But once we did 'Sonic Boom', I said, 'Well, we've made the point.' And then, a few years later, it was, like, 'Wow, why don't we dig deeper and get a little closer to the roots and the people that we loved and kind of do something else,' so we did that, and then I said, 'We're done.' But lately I've been thinking, yeah, we should do another. There's no secret that when anybody who's considered classic or of our generation does a new album, most people are not interested in hearing that stuff; they tolerate it at best. If you turn the sound off and you put on a live [THE ROLLING] STONES concert or a live [Paul] McCartney concert, I'll tell you every time they're playing a new song, 'cause the audience sits down. You tolerate the new song, 'cause you wanna hear 'Brown Sugar'. You tolerate the new song, because you wanna hear 'She Loves You', 'Strawberry Fields'…. whatever it is. So I'm aware that doing an album is more for my own satisfaction than anybody else's. That being said, if I don't feel the need to do it, then there's no need to do it."