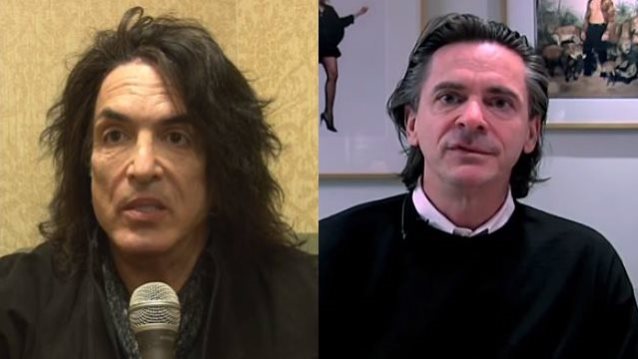 Paul Stanley says that Rock And Roll Hall Of Fame Foundation CEO/President Joel Peresman was "grasping at straws" when he accused the KISS guitarist/vocalist of "borderline racism" for allegedly claiming that hip-hop artists shouldn't be inducted because they don't play instruments.

Last week, Radio.com posted an interview with Peresman in which he discussed this year's Rock And Roll Hall Of Fame induction ceremony, including Stanley's acceptance speech, which contained Paul's criticism or the organization for being somewhat elitist. "The people, I believe we're speaking to the Rock and Roll Hall of Fame, and what they're saying is, 'We want more,'" Stanley said from the stage. "They want to be a part of the induction. They want to be a part of the nomination. They don't want to be spoon-fed by a handful of people."
Peresman told Radio.com, "That speech was the best advertisement for [pointing out that] what we did was right. He's been almost borderline racist, not in that speech, but in other interviews talking about how hip-hop artists shouldn't be inducted because they don't play instruments. It's like, 'What are you, kidding?'"

Asked in a brand new interview with Radio.com what his reaction was to Peresman's critique of his speech, Stanley said: "I was smiling. Because, look, the guy is clearly reeling from my exposing the Rock And Roll Hall Of Fame for what it is. He's doing damage control. But he's obviously never had an adversary who could articulate a point of view like I could. And, in desperation, he's attributing Gene's [Simmons, KISS bassist/vocalist] quotes to me. [Simmons told Radio.com in March: 'You've got Grandmaster Flash in the Rock And Roll Hall Of Fame? RUN-D.M.C. in the Rock And Roll Hall Of Fame? You're killing me! That doesn't mean those aren't good artists. But they don't play guitar. They sample and they talk. Not even sing!"] I never said anything that could be accused of racism. If [Peresman] wants to point a finger, those quotes were all Gene's. It doesn't change the basic truth of what I said."

Regarding whether he had a good time at the the night of the induction — aside from the well-publicized issues — Stanley said: "I wasn't there to denigrate, I was there to give constructive criticism and to make use of a platform, to really voice the opinion of the masses, of the general population.

"Look: I've spoken first hand with other inductees, and former inductees, and the process leading up to their induction was filled with really appropriate courtesies that were not afforded to us. The rules that [the Rock Hall] hold to only seem to apply to people they don't like. As far as the issue of what members and former members get in, it's just nonsense. I don't think anybody's ever called Peresman on it with any articulate argument. Clearly, the guy is trying to punch his way off of the ropes. He's stuck!

"The Rock And Roll Hall Of Fame went to THE GRATEFUL DEAD and other bands and asked them [which members] they wanted to have inducted. They didn't ask us! Hence, you get, what is it, fourteen members of THE GRATEFUL DEAD, including their lyricist [Robert Hunter], inducted? Because THE GRATEFUL DEAD's people said, 'It's all or nothing.' Well, that's a courtesy that wasn't extended to us. And it's easy to hide behind some alibi and rationale, like 'It isn't a science.' Well, being biased isn't a science either. But it's blatant and consistent. It had nothing to do with whether or not we wanted [current guitarist] Tommy Thayer or [current drummer] Eric [Singer], necessarily, inducted. But certainly this thin argument of 'They're wearing someone else's makeup' can't be used for [their late drummer] Eric Carr, or [former guitarist] Bruce Kulick, who played on multi-platinum albums, and played to millions of people over a decade.

"Let's call this for what it is. It's clear to most people and obviously Peresman wants to use his platform to take some of the steam out of my argument. But I don't go away."

When it was pointed out to Stanley that KISS wasn't the only band with an ex-member drama at this year's Rock Hall induction (former NIRVANA drummer Chad Channing originally thought he would be inducted), Paul said: "How about John Rutsey, the original drummer from RUSH, who played on their first classic album? I'm not pointing fingers at anybody, or questioning their getting in, but [bassist] Robert Trujillo never played on any of the METALLICA albums when he was inducted. And he was only in the band six years, so where do you draw the line? Clearly, where you choose to draw it." [Note: Trujillo had actually played on one album at the time of METALLICA's 2009 induction: 2008's "Death Magentic"]

Stanley last month called Hall Of Fame co-founder Jann Wenner a "spineless weasel" and said he and the rest of KISS were treated like "uninvited guests" during the band's Rock Hall induction ceremony.

"Our treatment at the Rock And Roll Hall Of Fame confirmed my worst suspicions," Stanley tweeted. "Wenner and the rest are spineless weasels." He went on to briefly explain that the band wasn't given passes or a schedule for the evening, but he didn't specify what kind of passes or schedules he was talking about.