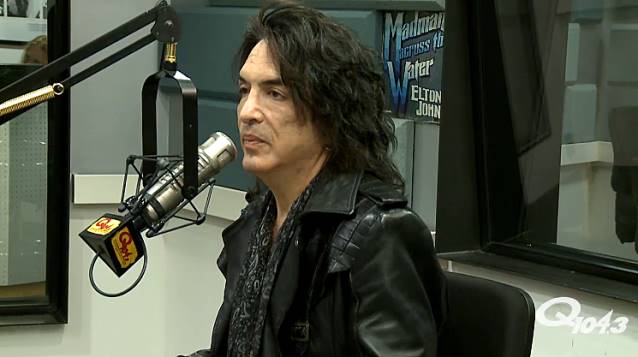 KISS guitarist/vocalist Paul Stanley was interviewed this past Tuesday morning (April 8) by Jim Kerr on the WAXQ-FM / Q104.3 radio station in New York City. The 25-minute chat can now be viewed below. A couple of excerpts from the interview follow (transcribed by BLABBERMOUTH.NET).

On KISS finally being inducted into the Rock And Roll Hall Of Fame:

Paul: "It really comes down to, it's an organization, it's a very impressive name, but it's not the Rock And Roll Hall Of Fame of the people. People in the street don't know half the people who've been inducted. It's a very small boys club who decides who they want in their club and who they don't. And it reached a point where it became so absurd that they finally had to swallow the pill. They're making it really small by only inducting the original four [members of KISS].

"Look, our influence on music and different genres speaks volumes. And regardless of what a few people who want to give rock and roll their own definition, the fact is rock and roll is succeeding against the odds and thriving and surviving, and we've done that for 40 years. So they're constantly looking for people who they approve of to put into their little organization. And I'm playing the game only because there are still some fans who see it as validation and vindication. And I respect that immensely. These people have fought for us for decades. And for that reason, of course I'm gonna go, and we'll celebrate something different than the Rock And Roll Hall Of Fame wants to celebrate. They wanna celebrate, grudgingly, the original four members. I'm celebrating 40 years. I'm celebrating members who played in the band on multiplatinum albums, other than the original four, who played for millions of people. One of them [Eric Carr] died of heart cancer at 40, and Rolling Stone, the only media outlet that didn't give it any kind of coverage. That's not a coincidence. It was the height of cruelty and disrespect that out of all the news services and all the publications, Rolling Stone decided not to acknowledge it. They can acknowledge some skateboarder or surf guy with a needle in his arm who dies. But here's a guy who played to millions of people and sold multiplatinum albums, but didn't meet their criteria of what credible rock is.

"So, look… I am doing this because the fans deserve it. And I will do it with [fellow co-founding KISS members] Ace [Frehley, guitar] and Peter [Criss, drums] and Gene [Simmons, bass/vocals], because the four of us started it."

On KISS' announcement that it will not perform at the Rock And Roll Hall Of Fame ceremony:

"We were willing to play with [current KISS members] Tommy [Thayer, guitar] and Eric [Singer, drums] and then have Peter and Ace come out and play and join us, in makeup.

"Look, we're not a band that plays in jeans and t-shirts, where you look and you can identify guys. If somebody walks out in KISS makeup, it's KISS, it's not anybody. We maintain the point of view that when you wear that persona, you are in the band. So, I've never quit the band once, never quit the band twice. But for me to roll the dice at the chance of it being a bad performance, or any of the members looking bad, former members, it impacts what I've been doing consistently for 40 years. So I said no, as far as the original four playing and that being the end-all [and] be-all. I just don't wanna be part of nostalgia, which could be Russian Roulette for me."

Paul Stanley's memoir, "Face The Music: A Life Exposed", was released on April 8 via HarperOne The 432-page hardcover features rare photographs of the legendary rocker and detail his hard-partying lifestyle as one of the co-founders of the heavy rock band who has sold over eighty million albums and performed more than two thousand shows around the world.