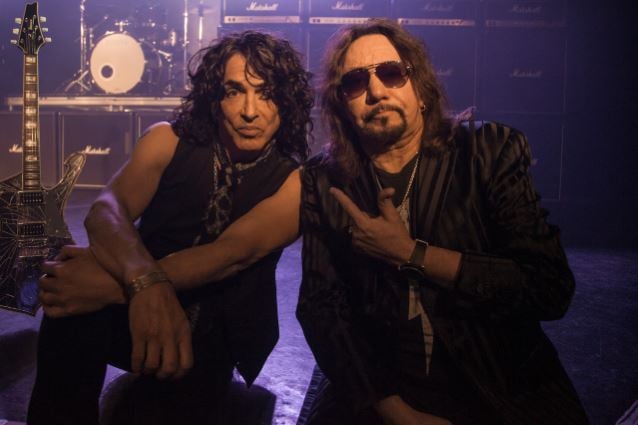 In a brand new interview with the Loudwire Podcast, KISS frontman Paul Stanley was asked if the "more friendly vibe" between him and Ace Frehley could result in the band at some point being rejoined by its original lead guitarist for a one-off show or a series of concerts. Paul responded: "I don't think it has anything to do with friendship. I would like to be friends with Ace forever, and although there may have been times where things have been a bit rough or touchy, I prefer and would love to keep our friendship going based on all the great things we've done together. But that doesn't necessarily mean you have to reunite or remarry or whatever it is. You appreciate what you've done together, and sometimes you should realize that it was a certain point in your life and it was a certain time and it was right on many fronts, whereas it's not the case now."

He continued: "I couldn't be happier with the band as it is today. Tommy's [Thayer, guitar] been [in KISS] a long time, and before he was in the band, he was still around the band. And Eric [Singer, drums] has been with us since… Well, he played with me in '88."

Stanley, who last year teamed up with Frehley on a cover of FREE's "Fire And Water", added: "I'm happy to do things with Ace — it feels really good and it was really fun. I think he appreciated it, and I appreciated doing it. And afterwards, when he wanted to do a video [for 'Fire And Water'], I was all for it. We had a great time — we got time to sit and talk.

"Would I help him out again? And I don't mean that in a way of trying to… Would I contribute to something he was doing? Sure. But it doesn't fall into the KISS realm."

Frehley recently wrote two songs with KISS bassist/vocalist Gene Simmons for inclusion on Ace's next studio album, tentatively due in 2018.

Asked if there has been any talk about him doing something with KISS again, Frehley told Eddie Trunk earlier in the month: "I can only be honest with you. It's something I haven't pushed and it's something that Paul and Gene haven't brought up to me. I'm just gonna let nature take its course. If the fans demand it, it'll probably get to a point where they're not gonna be able to say 'no.' But I've always said: they'll be fine with what they're doing and I'll be fine on my own. I've got a great solo band. We tour the world. We're touring Australia again with Alice Cooper in October. So whatever happens, one way or the other, everybody's gonna be fine. But if by chance Paul and Gene decide to bring me back in the fold and do a world tour, I think that could be great too, if it was handled correctly. But I haven't been approached, no. Honestly."