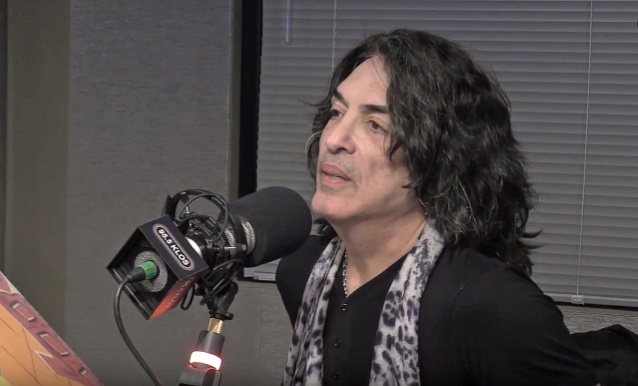 During yesterday's (Thursday, February 22) appearance on the Los Angeles radio station 95.5 KLOS, KISS frontman Paul Stanley once again reiterated his belief that the band can one day carry on without any original members, including him and fellow KISS co-founder Gene Simmons. "I think so," Paul said (see video below). "I tell you, Eric's [Singer, drums] been in the band 20-something years off and on, and Tommy's [Thayer, guitar] been in 15 years. So the people who initially thought, 'Well, it's gotta be the original four guys,' they're already 50 percent wrong. I think that KISS is a concept, it's an ideal, it's a way of performing and giving to an audience, and that goes far beyond me."

Asked if that means he thinks KISS can continue on with new members, Stanley said: "I really believe it will, I believe it can, and I believe it should. You know, KISS DNA is in every live show — from rap to rock to you call it what it is. Special effects, a way of entertaining an audience — that's what we've always been about: being the band we never saw. Once audiences started seeing what was possible, they wouldn't accept less from a lot of other bands. So I believe that nobody does it better than us, and nobody will continue to do it better than us."

Two years ago, Stanley spoke about how he would go about finding someone to replace him in KISS. He said: "Honestly, I think all the KISS tribute bands are great, but none of them have a good 'Paul.' So I'd like to see somebody who incorporates what I've done with a lot of the things that inspired me. And it's not a matter of a puppet being me; it's somebody who comes in and contributes and adds something new to it while still following the template that's been set."

In a 2016 interview, Singer said that he wasn't interested in being involved in a version of KISS that featured no original members. "That's not something that I really wanna do, to be honest with you," he said. "I've said it before. I think maybe other people have different sentiments about it, whether it's other guys in the band or Doc or whoever. But for me, if Gene or Paul aren't doing it, to me, it would awkward or difficult. Up to this day, I've always maintained that if one of those guys is done, then, to me, that's when it's done."

KISS fans are speculating that the band will soon embark on a farewell tour following the news that the band is attempting to trademark the phrase "The End Of The Road." An application from KISS was filed on February 8 to the United States Patent and Trademark Office, which — should it be accepted — means that the band could use it in connection with "live performances by a musical band." As it stands now, no official farewell tour has been announced.

As most fans remember, back in 2000 and 2001, KISS already performed a "Farewell Tour". The trek, which was the last to feature drummer Peter Criss, played 142 shows over five legs, covering North America, Japan, and Australia.

Former KISS guitarist Ace Frehley said in 2016 that the idea that the band could continue without any original members was "the most ridiculous statement I've ever heard [Stanley and Simmons] make." He added: "I think the only reason they make those statements at this juncture is to try to validate the fact that they have two other guys in the band that aren't the original members. So they're trying to rationalize to the fans, 'Well, you know, we replaced Peter and we replaced Ace, and eventually we're gonna replace ourselves. That's like [THE ROLLING STONES singer] Mick Jagger saying, 'Yeah, after me and Keith [Richards, THE ROLLINGS STONES guitarist] die, THE STONES will continue on with two other guys.' I mean, it's a joke."