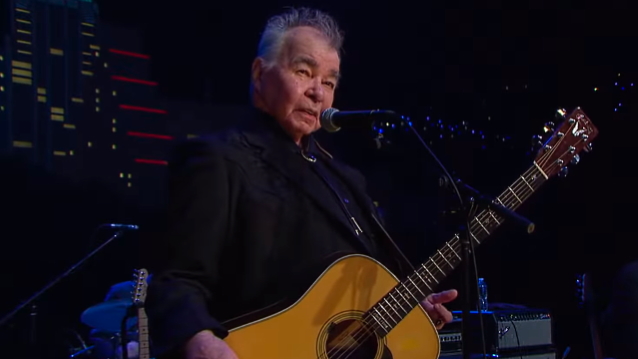 Paul Stanley (KISS), Joe Bonamassa (BLACK COUNTRY COMMUNION), Flea (RED HOT CHILI PEPPERS), Vernon Reid (LIVING COLOUR) and Tracii Guns (L.A. GUNS) are among the rockers who have reacted on social media to the passing of Grammy-winning singer John Prine, who died Tuesday at Vanderbilt hospital in Nashville from complications related to COVID-19. His death was confirmed by his publicist. He was 73 years old.

Prine was hospitalized last week after falling ill and put on a ventilator Saturday night, according to a statement from his family.

Prine's wife and manager, Fiona, announced on March 17 that she had tested positive for the virus after they had returned from a European tour. She has since recovered.

The country-folk legend, who was considered one of the all-time American songwriters, was responsible for penning and singing songs like "Sam Stone" and "Paradise". His career spanned several decades and earned him many accolades, including two Grammys.

Three years ago, Prine was named "The Mark Twain of American songwriting" by Rolling Stone.

Prine had battled cancer twice — throat cancer in 1998, and lung cancer in 2013 — and underwent hip surgery in February.

Terrible to hear. I remember meeting him and thinking he mistook me for someone else because he was so incredibly friendly. A genuinely nice person and a huge talent. https://t.co/g0gRKOi6at

This is really tragic. John was an inspiring soul and a national treasure. https://t.co/Ajo1HPSu6V

It’s a time of the Passing Of The GOAT.Each of whom remind us there are MANY ways to get there.They just gave it. Every. Thing.THEY. Had.
They will CONTINUE to give
The Force Was With John Prine & Hal Wilner & Bill Withers & Ellis Marsalis & Wallace Roney & Bucky Pizzarelli
? https://t.co/hDCSpMwbtG

“Often is a word I seldom use.” Genius! Rest easy John. #johnprine pic.twitter.com/AvKbvTV6jI


RIP John Prine. What a loss. What a legacy. ❤️?❤️ #ripjohnprine pic.twitter.com/qbhSzsBcNy

Now John Prine. What a beautiful songwriter; all those warm songs that cut their own path through a tangled world. I love him. Corona got him too. R.I.P. https://t.co/zSx8AnVgil