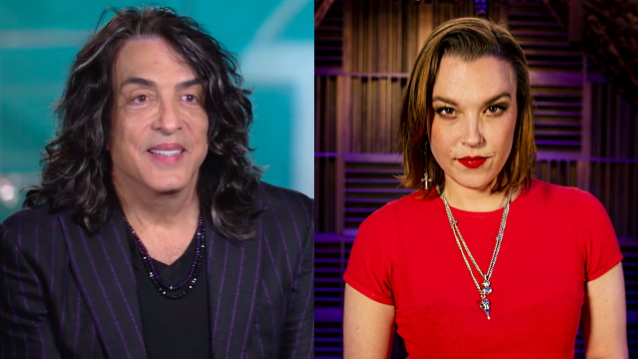 Hosted and executive produced by AXS TV fan-favorite Katie Daryl, acclaimed countdown series "The Top Ten Revealed" is back with 12 all-new episodes as a rotating panel of icons and experts from across the entertainment spectrum weigh in on the absolute best artists, albums, and songs in a wide variety of fun and unique categories. The season kicks off on May 9 with a sizzling look at "Smokin' 'Hot' Songs For Summer"; other highlights include a breakdown of the best "Artists Gone Solo" (May 16), "Motown All Stars" (June 6), "Patriotic Songs" (June 27), "Debut Albums Of 1981" (July 25), and "End Of The World Songs" (Aug. 8), among others. The upcoming season also boasts a slate of first-time panelists including KISS frontman Paul Stanley, "Full House" star Jodie Sweetin, "American Idol" finalist and singer/songwriter James Durbin, Grammy-winning songstress Macy Gray, BACKSTREET BOYS' AJ McLean, acclaimed comedienne Margaret Cho, Variety music critic Chris Willman and more, as well as returning favorites such as Dee Snider, Sebastian Bach and Matt Pinfield.

Rounding out the night is the insightful and entertaining profile series "A Year In Music", hosted by Grammy-winning singer/guitarist Lzzy Hale, frontwoman of the rock band HALESTORM. Putting the spotlight on a different period each week, "A Year In Music" presents an in-depth exploration of some of music's most definitive years — viewing each era's biggest bands, influential albums, surprising breakups and monumental breakthroughs through the lens of the political and social happenings of the time. The series' fourth season features 12 all-new episodes, opening with a look back at the Golden Age of Music Videos, 1982, which was headlined by the release of the signature Michael Jackson hit "Thriller". Other highlights include retrospectives on 2012 (May 16), which saw the rise of ONE DIRECTION and the tragic loss of Whitney Houston; 1967's Summer Of Love (May 23); the Y2K bug that threatened the year 2000 (May 30); the mainstream success of Horrorcore amidst the backdrop of the infamous O.J. Simpson trial in 1995 (June 6); the empowered women who provided the soundtrack to 2017 (June 13), and more.

"It doesn't seem all that long ago that 'The Top Ten Revealed' was making its debut on AXS TV, and now we are getting ready to head into our fourth season!" Daryl said. "It is truly an honor to be back, and we could not be more humbled by the support we've received from the AXS TV audience. Each new season presents a fun challenge to try and up the epic categories and iconic panelists from the year before, and I think we have really outdone ourselves this time with even more of the fun themes and legendary guests. I cannot wait to share everything we've been working on when season four kicks off on May 9!"

"I had a blast getting to cut my teeth as a first-time TV host on 'A Year In Music' last season, and I am ecstatic to be back with the series for season four," said Hale. "I learn something new with each episode, and it is so cool to be able to share all of these great facts and findings with other music enthusiasts across the globe. We're covering a lot of ground this year, spanning some truly landmark moments in both music and history. If you love music as much as I do, you won't want to miss a second of it!"