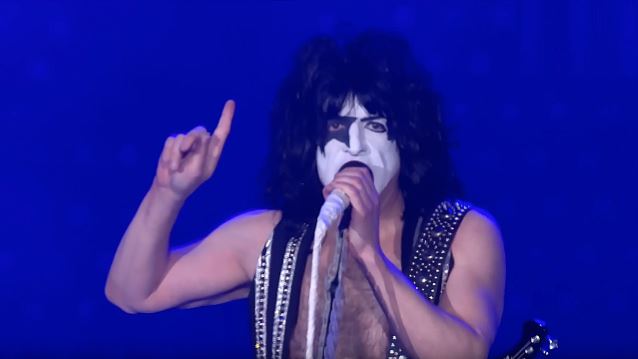 On August 26, KISS frontman Paul Stanley was interviewed by Tony Tone and Wes Jordan of Vintage Sound 93.1 FM. You can now listen to the chat below.

Speaking about the fact that it is more "challenging" for new artists to get started in 2016, with streaming music services making it difficult for musicians to make money, Stanley said: "It is [more challenging], and yet the same rules apply. If you wanna succeed on a large scale, I think you have to go directly to the people. And anything that's made it that has sustained usually does it by word of mouth. You have to go out there and play and bring your music to the people. If you go directly to what… I was gonna call it 'record company,' which doesn't even exist anymore. You've got probably the guy who last year was heading Michelin tires suddenly is in the music business; it's a very different thing out there."

He continued: "I think that most important is to go out and play for people and the word will spread, and that's how you start it off. Because otherwise, you get signed to some deal where somebody basically owns you — they own your merchandise, they own your music, they own everything — and if you don't come through on your first song, they throw you in the trash bin. So the music business has changed dramatically."

KISS kicked off the "Freedom To Rock" tour on July 4 with in Tucson, Arizona. The trek is hitting 40 cities through the summer — many of them places that the band has either never played or hasn't played in years.

Stanley told The Morning Call about KISS's setlist for the current tour: "The cream has always risen to the top, and the people expect certain songs and they'll get those, undoubtedly. And we'll try to mix in some lesser classics. But the idea of playing obscure songs is only appealing to a die-hard fan who knows our albums inside out. To go up on stage and play unknown sons for a handful of people as opposed to playing the songs that everybody wants to hear is really not in our best interests or the audiences.

"We want to do the best show and we want to blow away people who get to see us once every two years, five years, ten years. Those are the people who we put the show together for. If somebody come night after night or sees ten or fifteen shows on a tour, well, they may be asking why we don't change the show up much. But the fact is we don't change it up that much because once it's great, you don't mess with it. If you mess with it, you're doing it more for yourself than for the audience. We want to do the best show possible."