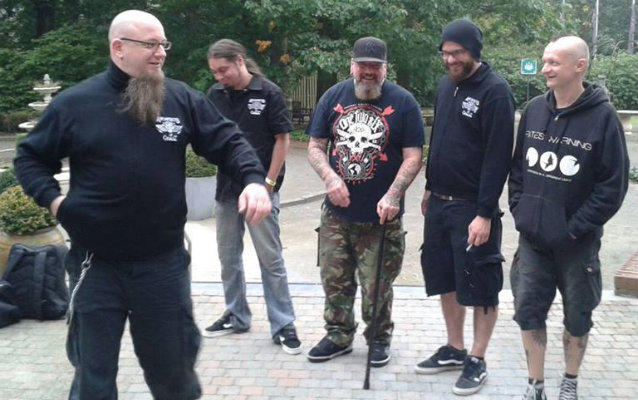 ARCHITECTS OF CHAOZ, the new band featuring former IRON MAIDEN singer Paul Di'Anno alongside members of Paul's longtime German touring backing group THE PHANTOMZ, will enter a German studio in February to begin recording its debut album for a tentative May 2015 release. ARCHITECTS OF CHAOZ says: "Look out for exclusive debut showcase shows around the world."

Di'Anno recently revealed that he scrapped his previously announced retirement plans, explaining to "The Metal Voice": "I was gonna retire because of a bad knee. And it was really pissing me off. What it is, I've got a knee replacement, 'cause it's all damaged; I've had a couple of motorcycle accidents. I thought about quitting — not because I wanted to, but I thought, 'This could get worse. I'm doing more damage to it.' But then I thought, it doesn't make a difference; it's about the voice. And I spoke to the wife and she said, 'Oh, my God. If you stay home for two months, I'll probably murder you.' So I decided in the end, 'Fuck it.' Doing all these things is great, but I actually wanna be part of a band."

Paul Di'Anno's April 9 performance at Lizard Club in Krakow, Poland as part of the Doładowanie festival was professionally filmed for an upcoming DVD, titled "The Beast Arises", to be released on October 6 in Europe through Metal Mind Productions and October 7 in North America via MVD. "The Beast Arises" will also be made available on CD, digital and vinyl.