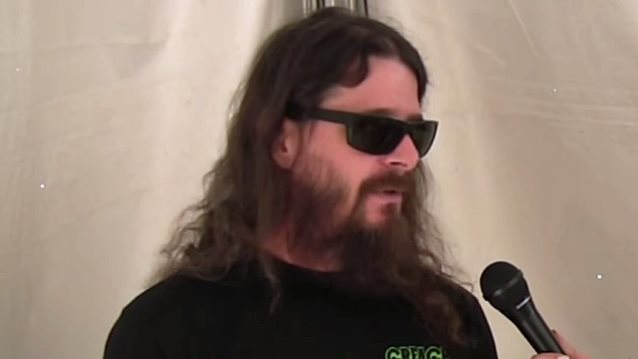 Kristyn Clark of Pop Culture Madness conducted an interview with SLAYER drummer Paul Bostaph at the fifth annual Monster Energy Carolina Rebellion, which took place May 2-3 at Rock City Campgrounds at Charlotte Motor Speedway just outside Charlotte, North Carolina. You can now watch the chat below. A couple of excerpts follow (transcribed by BLABBERMOUTH.NET).

On whether SLAYER's recently recorded album has a title:

Bostaph: "You know, I'm not sure if I can… There's a title that I think we're gonna go with, but nobody told me I could tell anybody yet, so I guess I can't tell you yet. But the new album's done. I think we're still trying to decide on artwork. But, you know, it's a SLAYER record. I hate to keep going back to that, but it's brutal. It's got elements of dark stuff on it. We even tracked a song that [late SLAYER guitarist] Jeff [Hanneman] had written for the last record [2009's 'World Painted Blood'], but it didn't make it on the record. So that song's gonna be on the record. It's a really good song. It's got a little bit of everything everybody likes. It's brutal. It's just SLAYER. That's the best way to put it. After losing Jeff, which was obviously devastating to everybody, we did our best to carry on."

On whether his approach to recording and touring has changed now that the growing popularity of streaming has negatively affected music sales figures:

Bostaph: "It hasn't changed at all. As a matter of fact… I mean, I've never been somebody who's been fortunate enough to live off… put a record out and tour minimally to make a living. I've always been on the road and I love it. So if it means you've gotta keep touring and tour more, I love it. I love being on the road. It's what it's all about. It's not about staying home and sitting by the swimming pool, which… whatever that means. It's about getting out here and playing. I mean, if I don't… If I'm home too long… We were off for five months, and I started going crazy."

On whether there are things about today's music industry that he would like to see change:

Bostaph: "Well, yeah. I think that people being able to appropriate music for free, I think that that's not right. I don't think people should go into poverty to buy something, but I also don't believe that we, as artists, should invest so much in what we do and turn around and give it away for free. I mean, if I buy a picture off somebody and I love it, I'm happy to pay for it. You know what I mean?! But, then again, I'm also somebody who… I'm wearing a free pair of shoes. You know what I mean?! Somebody gave… I'm, like, 'Yeah, I'll take 'em.' So, if people say… The saying is, "Free is for me.' That's the big thing, I think, that I would like to see change. How that changes, so the fans get what they want and we can, kind of, support ourselves to continue to do this. I'd like to see that change. Will it ever, or if it's gonna stay the same? I don't know. But it is what it is right now."

SLAYER's eleventh studio album is expected out in August, and will be released on the band's own as-yet-unnamed label through Nuclear Blast.

The new album marks the first time SLAYER has worked with producer Terry Date (PANTERA, SOUNDGARDEN, DEFTONES). It is also SLAYER's first CD since Bostaph's return to the band in 2013 and guitarist Gary Holt's addition to the SLAYER touring lineup in 2011.