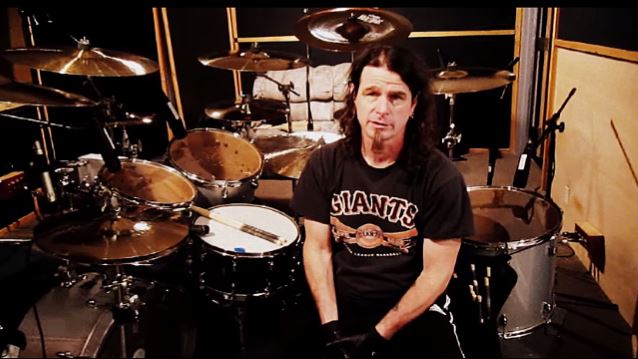 SLAYER drummer Paul Bostaph says that he is "a little tired" of hearing Dave Lombardo's version of what the ex-SLAYER skinsman has contributed to the songwriting process for the band's next album, explaining that he "didn't see [Dave] anywhere around when [Paul] was working on the music" for the upcoming CD.

Lombardo told the "Thrash Zone" show back in July that he "worked on all of the songs that are going to be on the new [SLAYER] album with Kerry [King, guitar]." He added: "They've been working on that album… shit… for years now. 'Implode', their new radio hit, is basically the guitar tracks that were done during my session, but they've removed my drums and added Paul's."

Asked by AndrewHaug.com, Australia's first-ever dedicated 24/7 rock and metal online radio station launched by Andrew Haug, the former host of Triple J Australia's "The Racket" radio show (originally "Full Metal Racket"; 2001-2011), about the progress of the recording sessions for SLAYER's next CD, Bostaph said: "It's shaping up really well. I've been away [from the studio]. They've been working on vocals now. But I'm finally getting some tracks back that have the rhythm guitars tracked and bass guitars tracked, and they're still working on vocals. But it's gonna be heavy. Unfortunately, we don't have Jeff [Hanneman, late SLAYER guitarist] with us anymore, but Kerry has really stepped up to the plate, and it's gonna be a heavy record. It's still gonna be a SLAYER record."

Bostaph also responded directly to Lombardo's claim that all the drum parts for SLAYER's next album were written before Paul rejoined the group. Bostaph said: "Kerry has a specific way he writes, and it really hasn't changed throughout the years. That's the one thing about Kerry and, respectfully, Jeff that I knew. I knew how they wrote. Both Kerry and Jeff have a very strong idea of what they want the drums to do when they come in. Kerry, when he comes in and he shows you an arrangement, he's gonna go, 'I want this kind of beat here,' or 'that kind of beat here,' or 'double bass here.' After a while, you figure it out and you interject your different ideas into the parts. Certain drum fills here, or maybe there's a part of the song where he's, like, 'I don't really know what I want the drums to do here, so do whatever you do here.'"

He continued: "It's kind of one of those things where I've written with Kerry so many times. The first time I [wrote] with him was 'Divine Intervention' and Kerry and I roomed together. So I got to know how he did things over the years pretty well. So when Kerry shows you something, I know he's got in his mind what he wants. So there's not a lot of room for a drummer to do anything in the music, but you have to know how to color it. But certainly the songs are brought in in a very strong format before you really get a chance to dig in. And maybe the arrangements may change a little bit here or there, but that's one of those things where you've just gotta get in a room [and work it out].

"It's a tough nut to crack here.

"People tell me all the time about, 'Hey, he said this,' 'He said that.' And it's one of those things, it's like… After a while, you've just gotta, like…

"I just wanna play drums, man. That's all there is to it.

"In terms of the new record, I heard that Dave [said that he] wrote all the parts on the new record for the drums. It's funny that I didn't see him anywhere around when I was working on the music. So it's one of those things where I get where he's coming from, but, man, there's two sides to every story, and I'm getting a little tired of hearing his. And I'm just gonna leave it at that, because I don't take it personally."

SLAYER's new album is being produced by Terry Date, who previously worked with the band on the song "Implode", which was made available as a free download as a "thank you" to the band's fans for their continued support following SLAYER's surprise performance at this past April's Revolver Golden Gods awards in Los Angeles.

Joining King, Bostaph and bassist/vocalist Tom Araya during the sessions for SLAYER's new album is guitarist Gary Holt (also of EXODUS), who has been filling in for Jeff Hanneman on tour for the past four and a half years.