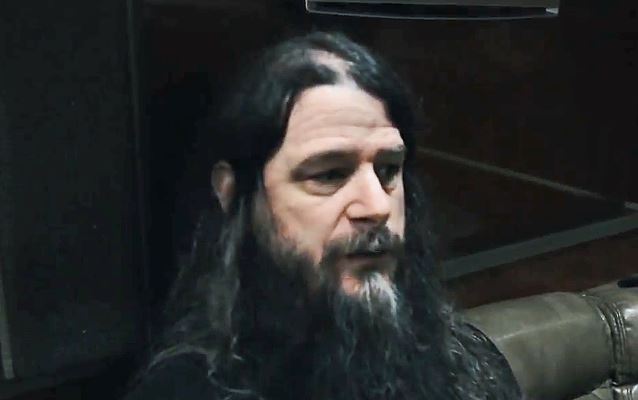 Exclaim!'s Aggressive Tendencies recently conducted an interview with SLAYER drummer Paul Bostaph. You can now watch the chat below. A couple of excerpts follow (transcribed by BLABBERMOUTH.NET).

On whether he felt pressure returning to SLAYER before the band's latest album, 2015's "Repentless":

Paul: "I'd be a liar if I said I didn't. The difference in when I first joined and when I joined now was there was no social media, there was no Internet when I first joined the band. That really changes people's focus and opinion, or back when I first joined the band, those same opinions were out there, but I never heard 'em. I had already played with the band, but does that mean that I was on par with everything in terms of my expectations of how I should play? I mean, I think I'm playing these songs better than I did when I first joined the band — without a doubt. So, yeah, I mean, as far as the instincts go on what I need to do, tempos, where I slow down, this is all the stuff that in the ten-year span when I was with the band before, I learned, and the chemistry you get when you play with a band, you learn those things. Yeah, that was there, but was it up to par in terms of my standards? No. It's better now. That being said, because of the climate, and social media, and everybody can put their opinion out there, and it's heard and read, that created some more pressure, I'd say. But, you know, I thrive under pressure."

On everyone having a voice on social media:

Paul: "To be honest with you, I welcome opinions. If you can't take the bad, don't take the good. Because sometimes people just wanna hear the good things, but there are criticisms out there, as an artist, you're not gonna like. And that creates an interesting dialogue between the fans. And sometimes I'll follow 'em and I'll listen. I'll go, 'This guy said this. I may not like it, but it's true.' And then somebody will come back in, and people sort each other out. If it creates a good dialogue, I'm way behind it."

On the "Repentless" title track:

Paul: "Kerry [King, guitar] wrote that song about Jeff [Hanneman, late SLAYER guitarist], but who better to know how to write about Jeff than Kerry, because this band, when I joined, that's what these guys were — uncompromising, and they know themselves so well that they're not gonna budge. It's, like, 'I know me and if I did that, I wouldn't be happy with it.' Being able to look yourself in the mirror and be happy with who you are is the most important thing you can ever do. So I think that's what 'Repentless' is."

SLAYER frontman Tom Araya recently told Billboard that there are no plans yet for the group to begin work on the follow-up to last year's "Repentless" album. That effort marked the band's first release since the death of Hanneman.