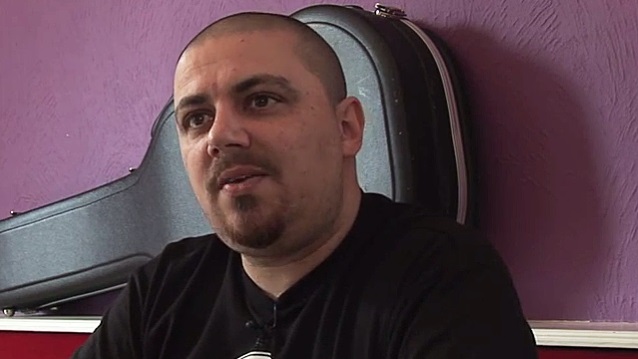 "As of now, PESTILENCE is no longer active in recording new material. As a matter of fact, it's on a permanent hold, as I want to concentrate fully on my new project NECROMORPH. The style will be more brutal, more crazy, more tech, more futuristic and more death. I'm pretty sure all my fans will dig this!

"Please don't be sad about PESTILENCE. We've been holding the PEST flag strong for 25 years and we feel it's now done.

"I thank all my fans for being there and supporting us all the way.

"If there is any interest in PESTILENCE doing old-school shows in the future, me and Patrick Uterwijk [guitar] will surely think about the options.

"I thanks all the PESTILENCE members since '86 for their musical talent and input.

"HAILZ TO THE FANS, we all love you.

NECROMORPH is described as a "death-jazz-fusion project featuring all-new and original members, including possibly Georg Majer on bass, in which Mameli will put down the eight-string and get reacquainted with his six-string Steinberger once more.

Not dissimilar to the jazz fusion elements found on "Spheres", but combined with the modern PESTILENCE riffing attack, NECROMORPH is set to blast past all expectations and shatter the eardrums of those thinking just another straightforward "jazzy progressive metal" album is on its way. "It's similar to jazz fusion," says Mameli, "but these riffs and songs will be more brutal than PESTILENCE… but way different than PESTILENCE!"

PESTILENCE's seventh album, "Obsideo", was released on November 12, 2013 via Candlelight Records. The CD was produced by Mameli and featured ten new songs. According to Mameli, the album's overall lyrical theme was "the journey of the human soul."