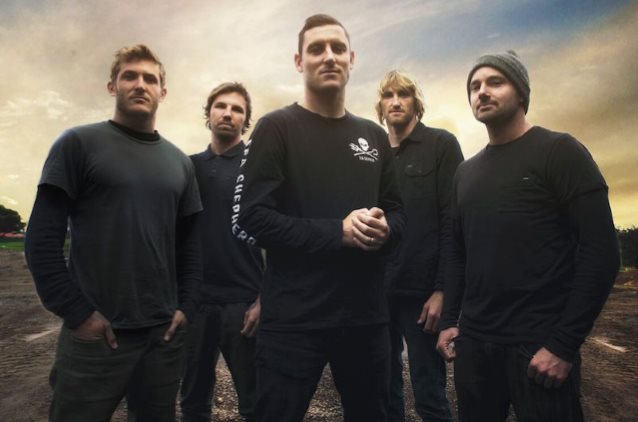 Australian metal act PARKWAY DRIVE will embark on a month-long tour of North America this fall. Openers for the trek include WE CAME AS ROMANS and COUNTERPARTS.

The dates kick off September 29 in Ft. Collins, Colorado at the Aggie Theatre and end October 25 in San Diego at the House of Blues. During this trek, PARKWAY DRIVE will make festival appearances at Wisconsin's Sonic Boom, Kentucky's Louder Than Life and California's Aftershock.

A special BLABBERMOUTH.NET presale for select dates began on Wednesday, August 3 at 10:00 a.m. and will end on Thursday, August 4 at 10:00 p.m. When prompted, type in the presale code "BLABBERMOUTH" to access tickets before the general public.

PARKWAY DRIVE is touring in support of its 2015 album "Ire", which was just re-released as a deluxe edition. The new version contains two new tracks, "Devil's Calling" and "Into The Dark", along with a remix of "A Deathless Song", featuring guest vocals from TONIGHT ALIVE's Jenna McDougall.

Explains PARKWAY DRIVE singer Winston McCall: "'Devil's Calling' was written post the release of 'Ire'. The lyrics came as a response to the growing tensions we are seeing worldwide.

"In the last year, we have seen people with flames of hatred, war, bigotry and fear used as a tool once again to divide and deflect our attention away from the corruption and malice that sits at the head of our power structures.

"It was written simply as a protest song; we see it, we all see what is wrong. This is a redirection of the energy; we take the fires you light and use them to burn the bridges that connect the power from the base."

"A Deathless Song" is a love track Winston wrote for his wife. It's a reference to "The Great Gatsby" book his wife read to him on their honeymoon and showcases Winston singing for the first time.

Winston says: "I've had massive respect for Jenna ever since TONIGHT ALIVE appeared on the music scene. Not only does she have an amazing voice but she uses her presence in the world in an incredibly inspiring and positive way.

"'A Deathless Song' was originally written as a duet, hence the repeating chorus but with time constraints in the studio we never had a chance to fully explore it, which is why we chose this path.

"The collaboration aspect was amazing. She worked so well with the material and concept of the song in creating a vibe that breathed life into our original vision and for that we couldn’t be more thankful."