The parents of the South African teenager accused of killing a fellow student with a sword and wounding three others while wearing a mask similar to masks worn by heavy metal band SLIPKNOT have spoken publicly for the first time since the tragedy.

In a statement to the Beeld newspaper, Morné Harmse's mom and dad said, "Firstly, we want to extend our heartfelt sympathy to the Pretorius family. We realise your precious possession has been taken away by our child's deed.

"We are terribly sorry and wish that the circumstances weren't so, and that we could change them.

"Morné is very small and scrawny for his age. Until Monday morning we never thought he was capable of such a thing. We are a very solid family and our children are raised strictly, but with a lot of love.

"Because of Morné's physical build, he was often belittled during his formative years. Where we could, we stood up for him and spoke to the bullies involved, but also accepted it as part of life.

"During a visit with Morné on Tuesday, we saw that we never realised the true impact that the physical and emotional abuse had on him.

"He explained to us that he felt so powerless and worthless that he wanted to make a stand.

"He went to school intending to give 'them' — which was never directed at a specific person — a fright and to hurt them, but he never intended to kill anyone. He wanted to release built-up frustration and his feeling of powerlessness. He wanted to be someone.

"Morné was a very small baby at birth, and through life we knew him as someone quiet who knew his place.

"To our regret, it looks as though Morné experimented with Satanism and that, in his psyche, it offered him a measure of protection. It was as though he could escape into this idea — that he would experience certain powers which would then offer him a protection mechanism.

"His words to us were: 'When I put on the mask, everything became dead quiet and my body moved. I wanted to stop, but couldn't.'

"He also mentioned that the matric final exams had put a lot of pressure on him. Although he never failed a grade, he was terribly afraid he would.

"We suspect a combination of stress, bad self-esteem, wrong influences and an absolute feeling of powerlessness led our child to this terrible deed.

"During our visit (in the cells), Morné was terribly confused and only realised on Tuesday that someone had died. He remembered basically nothing about the incident.

"Two lives have been destroyed by this unfathomable incident.

"We appeal to all parents to have deep conversations with their children to make sure everything is alright. One is inclined to attribute certain personalities to physical development, but that isn't always the case.

"We ask that you please pray for us, the Pretorius family, and everyone who has been affected. We also want to use this opportunity to thank everyone for their support.

"We appeal to people not to judge us. Please grant us the time to pick up the pieces of our lives. 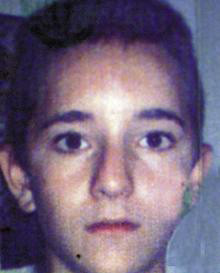 Police found this mask (see below) which resembles that of SLIPKNOT vocalist Corey Taylor, among other "Satanic" materials, in Morné Harmse's room after he had killed Jacques Pretorius with a sword at a school in Krugersdorp. (Photo: Sizwe Ndingane, The Star) 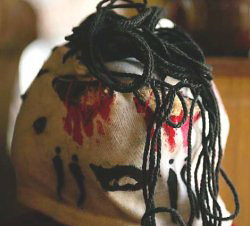