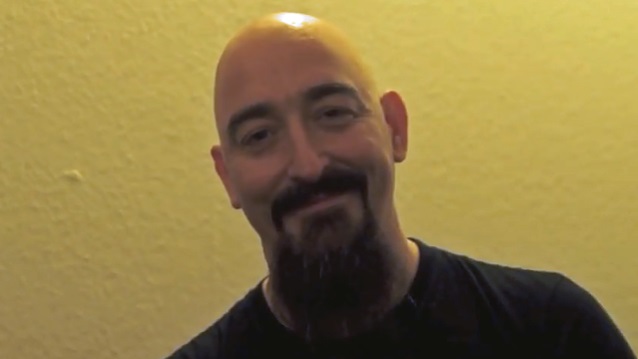 PARADISE LOST guitarist Aaron Aedy spoke with Metal-Heads.de prior to the band's November 8 performance at the Live Music Hall in Cologne, Germany. The full chat can be viewed below. A few excerpts follow (as transcribed by BLABBERMOUTH.NET).

On the upside of playing "depressing" music:

Aaron: "I always describe us as a dark cloud with a silver lining. We're optimistic pessimists. We've always been big fans of doom music. It's what we started with, really. It's good in a way, because when you play miserable music, you seem to be happier in life, whereas if you read an autobiography of a comedian, they have to make people laugh and in their real lives, they're miserable, so I prefer our version — happy in real life. We still have a great life together, even after nearly thirty years. We still enjoy each other's company."

On the musical direction of the group's latest album, "Medusa":

Aaron: "I think when we did [2015's] 'The Plague Within', the last song that was written for it was 'Beneath Broken Earth', and as we were putting it together in the studio, we were like teenagers, excited about it. Then playing it live, it had a lot of gravitas live, and I think that was probably a lead-in to how this album developed. We just love playing the doom songs live. We wanted to make the album sound very organic — the drums are actually the drums themselves recorded. They're not drum replacements or anything like that. They spent about three days just getting the sound of the kick sounding right to record. When I did my guitars, the drums [had] no compression or anything. It sounded great, because they spent the time first. It's better to get it right first rather than try to fix it later. It's a very good, organic approach on this album."

On what's next for the group:

Aaron: "We never plan for the future. Every album, we don't sit down at the end of a tour and go, 'Okay, what's the master plan for the next album?' We've never done that, really. It kind of quite organically happens with how everyone feels at the time, really. Even when there's half the album done, you can't really tell what the other half's going to be like. There's no master plan."

On whether his perspective has changed over the years:

"After we all turned 40, we began to really appreciate how lucky we are to be in a position where we're doing what we're doing. I think we're enjoying — well, I've always enjoyed it, but people in the band are enjoying it more because they appreciate how lucky we are. We get, like, somebody and their mother and their grandparents coming to signing sessions. It's quite bizarre, but it keeps you young. I don't feel any different to when we started, really."

On the impact of modern technology:

Aaron: "It's great, because fans can interact with each other worldwide and send each other clips. There's pros and cons to every developing technology, but I think it's made a lot of bands really [say], 'We've got to be good, because if it looks crap on YouTube, nobody's going to come.' It does sort of encourage you to, rather than getting absolutely hammered like people did in the nineties and then go on stage and be okay, but not brilliant, I think it's made everybody up their game, which is a good thing."

Aaron: "I think Waltteri will be here as long as he wants to be. He loves PARADISE LOST. He's known the music since he was about five years old, since his mother was into PL. He's a technically amazing, amazing drummer. He'll probably be drumming for someone massive in ten years if he's not with us, but I can't see him going anywhere. He's such a lovely lad."

"Medusa" was released on September 1 via Nuclear Blast. The album was recorded in Woburn, England with producer Jaime Gomez Arellano. The artwork was created by Branca Studio and shows the infamous Gorgone Medusa from Greek mythology, carrying venomous snakes as hair and turning anyone into stone who would dare to look into her eyes.