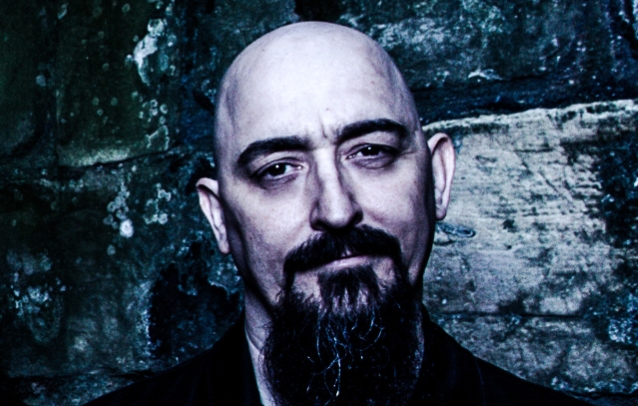 Alex Haber of Heavy New York conducted an interview with guitarist Aaron Aedy of British gothic doom pioneers PARADISE LOST prior to the band's October 3 concert at Gramercy Theatre in New York City. You can watch the entire chat below. A few excerpts follow (transcribed by BLABBERMOUTH.NET).

Aaron: "It's been really good. We did quite an extensive European tour behind it and a few sort of fly-in shows. [The] festival season as well has been great. It's been really well-received on the back of 'The Plague Within', the album before, which also did pretty well. We feel pretty lucky after 15 albums to still be plodding around doing it."

On whether "Medusa" was meant to be the logical follow-up to "The Plague Within":

Aaron: "We never really plan anything, even when the record's been written halfway through, there's no real big plan for anything. It's very much written about the time. What we found generally over the years, some of our album cycles come in two album pairings. But in fairness, usually when we do something like 'The Plague Within' is how heavy that sounds like, especially 'Beneath Broken Earth', which is one of the most miserable doom songs we've ever written. I love playing it live — it's great. That song especially, I think that led us into how the next record was going to be sounding, a lot more sort of slower-paced, more miserable, if we can get more miserable. Yeah, they seem to always come in pairs like 'Icon' and 'Draconian Times' and 'One Second' and 'Host'. They always seem to come in pairs. It's not a particular plan. We like how the albums sound live and that seems to be the wave that pushes on for the next one."

On whether PARADISE LOST has a formula and template they work off of, or, each record is its own experience:

Aaron: "They're all very much their own experience, but I think after 30 years, PARADISE LOST is PARADISE LOST, if you know what I mean. I think we've done quite a bit of experimenting in the past, and I think sometimes what you do is throw yourself a curveball creatively. You can almost re-center yourself to what the core of what you are, I think. I think in recent years we've been working back toward where we see ourselves nicely balanced, I think. I mean, 'The Plague Within', the album before, it had a variety of tones, sound and speed and tempo and a little bit of all of our history scattered through it. I think between that and 'Medusa', PARADISE LOST is PARADISE LOST. We've never tried to sound like anyone else anyway, but we're very much comfortable in our shoes is the way you could put it. Then again, you never know; sometimes we get itchy feet. The music's got to be fresh and exciting to play. If you're going to be touring it for two years, you can't be playing something you're bored with quickly. We've always written albums for our own pleasure, which is quite lucky that other people have seemed to have liked it. It's quite humbling, that kind of scenario. It's been pretty cool."

On what his definition of "doom metal" is:

Aaron: "You know what? It's miserable music, I think. We come from the north [of England]. I'm sure it's very much the same. We come from an area where there's a lot of rain and it seems to be good for making goth music and doom music. Doom is quite a broad term, as you just said with all the variety of bands you can have underneath that umbrella. But we've been called all kind of stuff over the years: 'gothic metal', 'gothic doom,' 'gothic doom classicists,' but my favorite ever was from Malcolm Dome who used be with Kerrang! in the '80s and '90s and he once called us 'gondoliers of gloom'. That's fucking great. I remember reading it in the magazine in the news agent and I was, like, 'Man, that is brilliant.' It's still my favorite. I don't know; I think pigeonholes are less relevant these days because there are so many bands who are pushing the boundaries of each pigeonhole. It's quite difficult to tie them down."

"Medusa" was released in September 2017 via Nuclear Blast.