British gothic metal pioneers PARADISE LOST have enlisted Adrian Erlandsson (CRADLE OF FILTH, THE HAUNTED, AT THE GATES) as their new full-time drummer.

Guitarist Greg Mackintosh comments: "Adrian has been a friend and acquaintance for some time. After calling me to see if the drumming position was still vacant, we quickly arranged for an audition right before entering the studio to record our new album. We knew immediately that he was the man for the job. Playing the songs with him felt very natural. He is the same age as us and from a similar musical background. Unfortunately, it was too short notice to play on the new album, but everything we do from now on will have Adrian involved. We look forward to rehearsing with him when we leave the studio and to doing our first show with him in Norway on April 10th (Inferno Festival)."

Adrian Erlandsson adds: "PARADISE LOST has been one of my favourite bands since I first heard them in 1990. When my fellow BRUJERIA member Jeff Walker told me that PL were looking for a drummer, I got in contact with Greg straight away. After a few chats and e-mails, I was on my way to the audition. I had learnt 10 songs out of their last setlist, but after playing only four songs, Nick [Holmes, vocals] said, 'The job is yours if you want it.' Great success!! I look forward to growing even older with the lads and rocking hard with them live!!"

Swedish newspaper Nerikes Allehanda has released a five-minute video report (see below) from the Fascination Street Studios in Örebro, Sweden where PARADISE LOST is recording its new album with producer Jens Bogren. Due in late 2009 via Century Media Records, the highly anticipated follow-up to 2007's "In Requiem" will feature around 10 tracks, including "First Light", "As Horizons End", "Faith Divides Us, Death Unites Us", "Frailty" and "My Last Regret".

Commented vocalist Nick Holmes: "We are very happy with [producer] Rhys Fulber's work on the last album ['In Requiem'], but after working on three albums together, we decided it was time to go for a different approach. After hearing the work he did with our 'Anatomy Of Melancholy' live DVD, we decided that Jens Bogren was the man for the job."

He continued, "Our approach this time has leaned even more towards the heavier side of things, even more so than the last. It is vital not to lose touch with our musical trip over the last 20 years. Our music may have had different facelifts, but it has always been 'dark' and the new album will be no exception. Musically and lyrically.

"Writing a new album is always exciting; we never get bored of writing music, and for me, it is the best part of being in a band. Each album is like a challenge to better ourselves, or at the very least, do something that's different to everyone else. We strive to make the ultimate modern gothic metal album, and for me that has nothing to do with the common trend of 'romance' and 'roses.' It should be music to be murdered by." 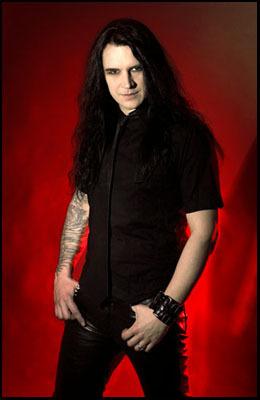