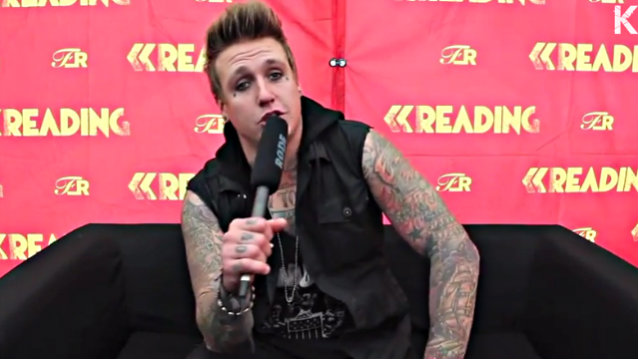 PAPA ROACH frontman Jacoby Shaddix spoke to Kerrang! magazine at this past weekend's Reading Festival in England about the band's forthcoming eighth studio album "F.E.A.R. (Face Everything And Rise)", which will come out in early 2015. Shaddix said that the follow-up to 2012's "The Connection" is "probably the most positive record we've written. The element is from the darkness to the light."

He continued: "I think that there's obviously been an element of hope within the despair of the music that we write, and I think that that's always key, and that's very important to what we do, is to always have that elemnent of hope, and that's laced throughout the record."

The new album was recorded in Las Vegas, unlike "The Connection", which the band did at home in Sacramento. Shaddix explained: "[Recording Las Vegas] was, for me, very challenging, in a sense of, I was in a lot of fear going to that city, 'cause I've got struggles with drugs and alcohol. I've been sober for a few years now, and it was just, like, 'Alright, how am I gonna go to Vegas and stay focused?' And I just had to put my spiritual armor on and just go out there and do my best to be creative. And it was a trip, because when we got there, it was like a floodgate just opened."

Speaking about the musical direction of the new PAPA ROACH material, Shaddix said: "I think it's at all things good PAPA ROACH — it's big, banging riffs, it's a very guitar-heavy record. We kind of shied away from some of the synth stuff on most of the stuff, but then other songs, I bring back some of the rapping in some of the songs, which is freakin' killer. And it's a very dynamic record. It spans across the board, from heavy to reflective, to just in your face, out of control. It's just everything that we believe is great about PAPA ROACH. And we'll leave it up to the fans to be the judge of it. I love it."

Some of the working songtitles on the new album include "Just As Broken As Me", "Never Have To Say Goodbye", "Gravity" and the title track, "Face Everything And Rise".

The band's last album, "The Connection", was made as Shaddix was going through personal turmoil, including problems in his marriage and a struggle to stay sober.

He told The Pulse Of Radio a while back that the music of PAPA ROACH thrives off its members' personal dramas. "Part of the chaos and the discontent and the madness that we have in our lives and that we bring to the table with the music is what makes, you know, who we are and the music that we make, you know," he said. "And I think if everything was just all cool and we got along perfect and we loved each other every single moment of every single day, I don't think we'd even have the passion to make music or make the music that we do make."