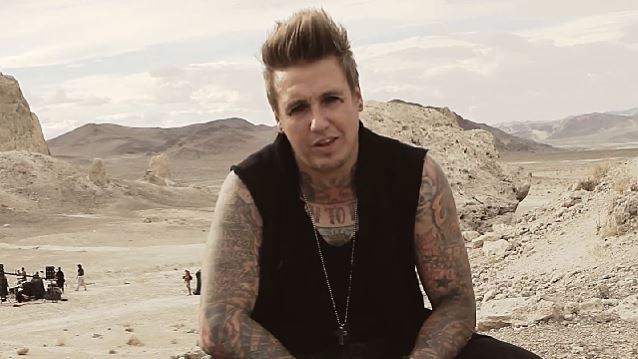 In a brand new interview with RockSverige.se, PAPA ROACH frontman Jacoby Shaddix spoke about what it was like touring with rap superstar Eminem in 2000 and 2002 as part of "The Anger Management Tour".

"I was young, he was young and we were both partying on that tour and we had some ragers," Jacoby said. "I remember this one night, we had a video camera with us and we were all fuckin' high on ecstacy and we were fuckin' drunk. We were on everything, and it was me, my drummer [at the time] Dave, Eminem, his wife at the time and one of his wife's friends and the rapper Xzibit, and we had, like, a WWF wrestling event in the dressing room. Eminem was hitting me with a fuckin' chair and we go back and watch that video and go, 'Man, we were fuckin' young and wild!' Backyard wrestling with Eminem in the dressing room. There's a video of it but we haven't put it out yet. Those were the days, and nights!"

Shaddix also disussed the hardships of being a dad and being out on the road for several weeks at a time.

"It sure is difficult for me," he said. "I've got three boys, 12, 10 and a one-year-old. That's one of my biggest internal struggles in my personal life, missing a lot of those key moments and being able to sit down with my son. He just had a girlfriend. I'm like, 'Oh my god, my son is 12 and he has a girlfriend! He's too young!' Her mom called us and said they had to split up and we had to tell our son, 'You're not allowed to have a girlfriend.' And he was in tears. I wanted to be able to be there and have that conversation face to face with my son and just let him cry on my shoulder for a minute: 'It's alright bud! There's plenty of time for girls in the future.' [Laughs] I struggle with that, but thank God for technology! I can Skype and Facetime with him. I have conversations with my kids regularly when I'm home, quality conversations in depth and not just like, 'Hey, son, let's go throw a ball!' I've asked my kids a couple of times, 'Do you resent me?' and they're, like, 'What's resent?' and I go, 'Are you made at me that I'm gone on the road?' And they say, 'We're not mad at you. We just get sad sometimes.' Now I'm okay with that, because every family has their personal struggle and thank God mine, that's our struggle. I can think of far worse struggles, so we're doing alright."

PAPA ROACH's eighth full-length album, "F.E.A.R.", will be released on January 27, 2015 via Eleven Seven Music). The follow-up to 2012's "The Connection" was recorded at The Hideout Recording Studio in Las Vegas. The band worked with two producers, Kevin Churko and Kevin's son Kane.