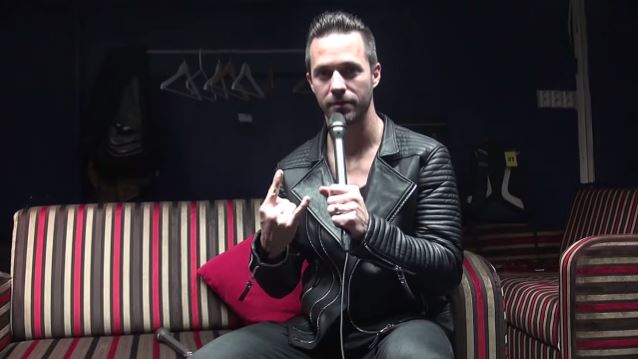 Kaaos TV conducted an interview with PAPA ROACH guitarist Jerry Horton before the band's June 23 performance at The Circus in Helsinki, Finland. You can now watch the chat below. A couple of excerpts follow (transcribed by BLABBERMOUTH.NET).

On the fan response to PAPA ROACH's eighth studio album, "F.E.A.R." (Face Everything And Rise), which was released on January 27:

"[We've had] lots of good feedback, which is… You know, it's a little bit surprising, because [the album] is different, and it sounds different from the last record. But even people that are not die-hard PAPA ROACH fans — like on the festivals that we've been doing — people are jumping up and down. Just at the end of the song, they're showing that they like that one. And it's good. We're excited about it."

On having IN THIS MOMENT's Maria Brink as a guest on "F.E.A.R.":

"It seems like with every record that we do, when we talk about doing it and what our goals are, the idea of having a collaboration comes up. And we've talked about having a female vocalist for quite a few years, but we could never agree on anything… on anyone between us. And then we were on tour with SHINEDOWN and IN THIS MOMENT a couple of years ago, and decided that we were gonna work with the producer [Kevin Churko] that did IN THIS MOMENT's previous albums and learned that we would be in the studio at the same time. So we said, 'Okay, are you down for this? Do you wanna do a song with us?' And she said, 'Of course.' So immediately we all said, 'Okay. Cool. We just have to find the right song for her to sing on.'"

PAPA ROACH singer Jacoby Shaddix said that "F.E.A.R." was "probably the most positive record we've written" and described it as a "very guitar-heavy record."

"F.E.A.R." followed up 2012's "The Connection", which was made as Shaddix was going through personal turmoil, including problems in his marriage and a struggle to stay sober.