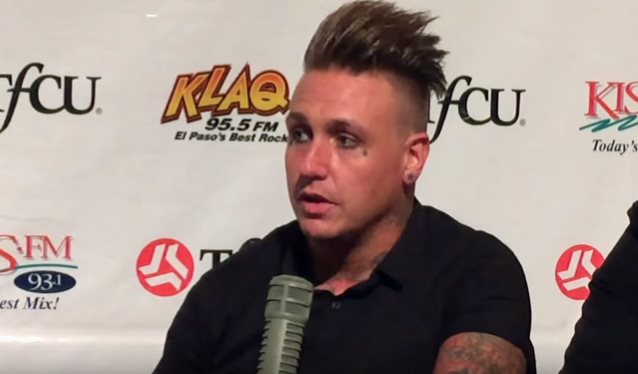 KLAQ's Lisa Sanchez recently conducted an interview with the four members of PAPA ROACH. You can now watch the chat below.

When asked why they think the "nu metal" genre — which PAPA ROACH got lumped into in the late 1990s — got such a bad rap from fans and music critics alike, PAPA ROACH frontman Jacoby Shaddix said: "A lot of people didn't like [LIMP BIZKIT frontman] Fred Durst — really and truly. That was real bad. and everybody was hating on him. And he was kind of, like, 'Why do you wanna hate me?' And so, he was kind of the poster boy for the genre, and so if people wanted to take pot shots at it, it was easy. But I got nothing but love and respect for him. And for us, it's, like, at the time, we were the bands that were just selling millions of records, and when you're selling millions of records, people wanna… When you're on the top, everybody wants to throw rocks. You know what I'm saying? So, kick rocks, punk!"

Shaddix, however, made it clear that PAPA ROACH would never attempt to rehash its earlier sound in an attempt to recapture the band's past glories.

"For me, P-ROACH, it's always about progression and evolution," he explained. "So we're not trying to bring back the old days at all, but we definitely went back and, I guess, brought some of the old-school elements into the music, but without trying to just go, 'All right. Now we're old school again.' 'Cause we've gotta maintain a progressive vibe. But there are some rad bands that were influenced by the nu metal genre back in the day, like BRING ME THE HORIZON, OF MICE & MEN… I mean, countless other bands."

PAPA ROACH's ninth studio album, "Crooked Teeth", was released on May 19 via Eleven Seven Music. The disc was made available digitally and physically, as a standard (10 tracks) and deluxe (10 tracks + 3 brand new tracks + 16 Live tracks Live at the Fillmore Detroit) editions.

Written and recorded in a cramped North Hollywood studio, "Crooked Teeth" was produced by first timers Nicholas "RAS" Furlong and Colin Brittain, with the exception of "Born For Greatness", which saw the band collaborate with writer/producer Jason Evigan (Jason Derulo, Demi Lovato, Zedd, MAROON 5) for this positive, pulsating anthem. Furlong and Brittain, who grew up listening to PAPA ROACH, inspired the band to revisit some of the traits that personally endeared the band to them, most notably Shaddix's remarkable rapping technique and the band's intense live energy.