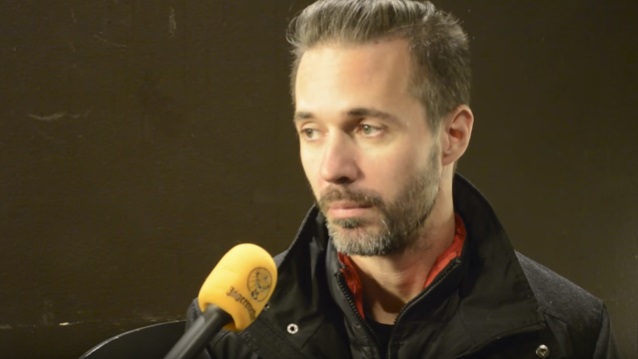 One of the most pronounced changes at concerts in recent years has been people who record performances on their cell phone. Most music fans — and a fair share of artists — have a big problem with this, with a number of musicians coming forward and denouncing the habit as disrespectful.

Asked by Finland's Kaaos TV if PAPA ROACH gets many people at its shows who film the performances on their phones, Horton said (see video below): "We do see a lot of it, and it's kind of annoying to me, only because I feel like you're paying money for the experience, then you should have the experience and not… I feel like if you're gonna watch it on a screen, you can always just go on YouTube and watch it on YouTube. But I guess people want to have that memory forever, maybe, so I can't be too critical. But, for me, I just couldn't do it."

One of the most outspoken critics of cell phone usage at concerts has been SLIPKNOT and STONE SOUR singer Corey Taylor who said in a recent interview that he didn't have a problem with people taking pictures at shows. "But why are you filming it?" he said. "It's one thing to film it, it's another thing to just be staring at your screen while you're filming it. It's right there. Are you so terrified of real life that you can't do anything unless it's on that little four-by-four screen? Ugggh. It's very weird."

Legendary rocker Peter Frampton made headlines in 2014 when he got so fed up at being snapped by a fan's smartphone that he took the man's phone and threw it backstage.

PAPA ROACH recently confirmed that it has already been in the studio writing and recording material for the follow-up to this year's "Crooked Teeth" album.

"Crooked Teeth" was released on May 19 via Eleven Seven Music. Written and recorded in a cramped North Hollywood studio, the disc was produced by first timers Nicholas "RAS" Furlong and Colin Brittain, with the exception of "Born For Greatness", which saw the band collaborate with writer/producer Jason Evigan (Jason Derulo, Demi Lovato, Zedd, MAROON 5).