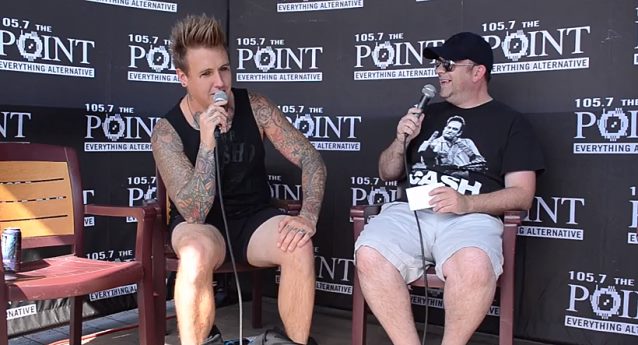 Donny Fandango of the St. Louis, Missouri radio station 105.7 The Point conducted an interview with vocalist Jacoby Shaddix of Californian rockers PAPA ROACH during this year's Carnival Of Madness tour. You can now watch the chat below.

In an interview with Mosh Pit Report, PAPA ROACH drummer Tony Palermo stated about the progress of the songwriting sessions for the band's follow-up to last year's "The Connection": "We're working on ideas. We always lay stuff down in the back of the bus just to keep it flowing. I'll come up with beats, I always do a lot of voice memo stuff just to get it down quick if I have an idea that pops into my head and I don't wanna forget it. I just do a 10- or 15-second voice memo in my iPhone. It's usually me breathing heavy into the phone in a beat style then I'll come in [to the recording setup on the tour bus] and lay it down on this little keyboard here. It doubles as a drum set, which is weird, but it works. We put stuff together on the computer, and once we get into the actual studio in writing mode, then we go through all the stuff and decide what's good and what sucks, or isn't PAPA ROACH. It's cool. There's a lot of down time on tour, so it's a good tool to keep it flowing so you're not like stuck writing 15 to 20 songs for a record in 30 days. It's really hard to do that."

Palermo also spoke about a number of PAPA ROACH shows being canceled due to Jacoby Shaddix's vocal issues. "I don't know if it's worse for [the fans] or for us," he said. "We pride ourselves on playing rock 'n' roll music live to people, and when something unfortunate like that happens, I know people who travel, like plane tickets, hotels, but you know, we're also losing money. It's not really about the money, though, it's just, for us, you gotta take care of that and get it better so you have a career. Like last year, when we had to pull off of Uproar, it was so bad. We played three shows and then he just couldn't sing anymore; he had to go in and get his voice operated on. It was that serious and that drastic. We just went through it again a little bit, but he didn't have to get an operation, he just had to go on a little more strict vocal rest and got paired up with a new vocal coach that showed him different techniques than he'd been using."

PAPA ROACH's latest album, "The Connection", was re-released in Europe as a special tour edition on May 6 via Eleven Seven Music. The effort contains a bonus DVD of a concert at Club Nokia in Los Angeles featuring performances of new songs as well as the band's biggest hits, including "Still Swingin'", "Give Me Back My Life", "Before I Die", "Last Resort" and "Between Angels & Insects".