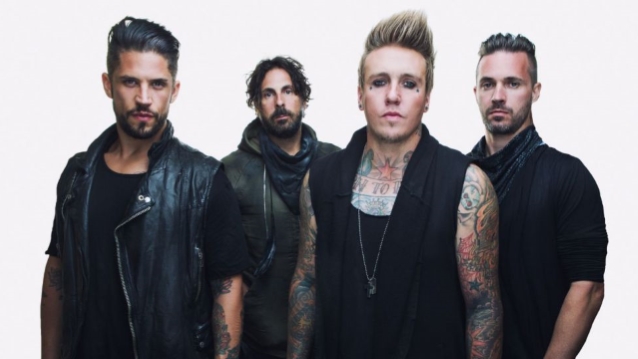 PAPA ROACH frontman Jacoby Shaddix spoke to Rock Sound about the progress of the recording sessions for the follow-up to the band's 2017 album "Crooked Teeth". He said (see video below): "We did work with the same producers [Nicholas 'RAS' Furlong and Colin Brittain] that did 'Crooked Teeth'. So this is like the follow-up and it feels great. We played a bunch of tracks for our friends in BEARTOOTH and some other folks last night, and everybody was feeling it. So it's exciting to play new music for people and they're, like, vibing it. So it felt good. Unless they're totally bullshitting us. And if that's the case, they are great bullshitters."

Elaborating on PAPA ROACH's decision to re-team with the "Crooked Teeth" producers on the upcoming disc, Jacoby said: "We have a rhythm going with these guys. We were supposed to go on tour with OF MICE & MEN at the beginning of the 'Crooked Teeth' record cycle, and Austin [Carlile, then-OF MICE & MEN singer] had gotten really sick. And so the tour was canceled. So we were, like, 'All right. Well, if we're not gonna be out on the road, let's go create.' So we went in and we created five or six songs then. And then we went back in June and July and took another stab at it, and we have 12 songs that are… There's bangers in there. We're gonna go back and do one more track and see if we can beat one of the songs. And we'll have a full-length record ready to go. And so either later this year or early next year for a release."

Guitarist Jerry Horton told Morgan Richards Interviews that PAPA ROACH's new material sees him and his bandmates "really trying to explore more dynamics and not just be a wall of guitars all the time."

Shaddix described the musical direction of the new PAPA ROACH songs to the Lazer 103.3 radio station as "a pretty bold evolution," saying that the tracks that have been laid down so far are "so inspiring and just unique and different and rocking and anthemic and passionate."