Proceeds from the event will benefit the Ronnie James Dio Stand Up and Shout Cancer Fund.

The live concert event will feature exclusive collaborative performances by hard rock and metal legends, including members of:

Opening the show will be REVOLUTION MOTHER and MOTHERSHIP.

Ronnie James Dio Stand Up And Shout Cancer Fund is an organization that funds cancer research, cancer screenings and various cancer programs while supporting families that have loved ones suffering from the disease.

"I think the thing that embodies this event and entity is unity; bringing everyone together to celebrate the music played and loved by Darrell and to benefit the foundation of a very beloved man, Mr. Ronnie James Dio," said Rita Haney, longtime girlfriend of Abbott and the person who knew him best. "Dimebag Darrell was notorious for giving us all so much, in some way, even to this day. So to be able to give back in his name is such an honor. With all of this amazing talent in one place, it makes for a damn good celebration! C'mon out and getcha pull!"

You can now donate any amount that you can afford to the Ronnie James Dio Stand Up And Shout Cancer Fund by going to www.ronniejamesdio.com. Your generous donations will go to cancer research, cancer screenings and various cancer programs. Your donations will also help families that have loved ones suffering from this horrible disease that took Ronnie from us too soon.

Dimebag and his brother, drummer Vinnie Paul Abbott, formed PANTERA in the mid-eighties in Texas. The band recorded four independent albums before their 1990 major label debut, "Cowboys From Hell", introduced a heavier sound and made them a favorite with metal fans. 1994's "Far Beyond Driven" debuted at No. 1 on The Billboard 200 without benefit of a commercial hit single. 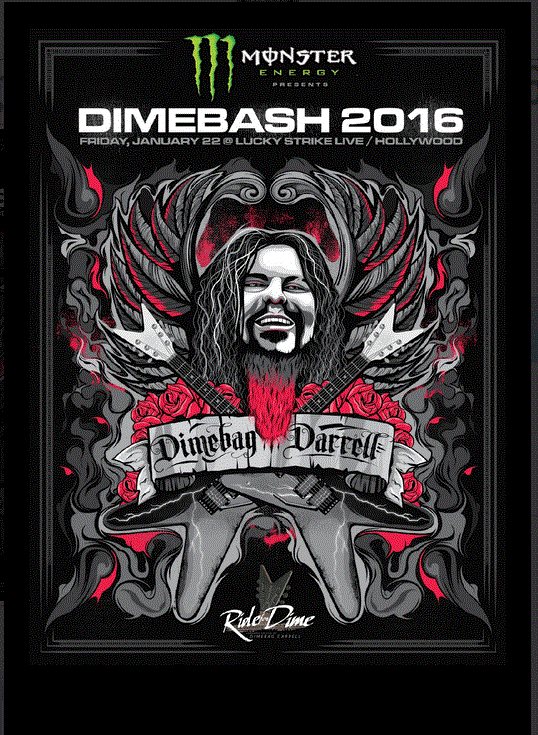