PAIN, the Swedish band led by HYPOCRISY mainman Peter Tägtgren, will release its new album, "Cynic Paradise", on October 31 via Nuclear Blast Records. The follow-up to "Psalms of Extinction", which was released in 2007 via Roadrunner, features "eleven gems offering a vast variety of styles and influences which are even new for PAIN," according to a press release. NIGHTWISH singer Anette Olzon makes a guest appearance on two tracks — "Follow Me" and "Feed Us". The artwork (see below) was created by renowned artist Travis Smith (AMORPHIS, OPETH, NEVERMORE). 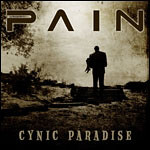