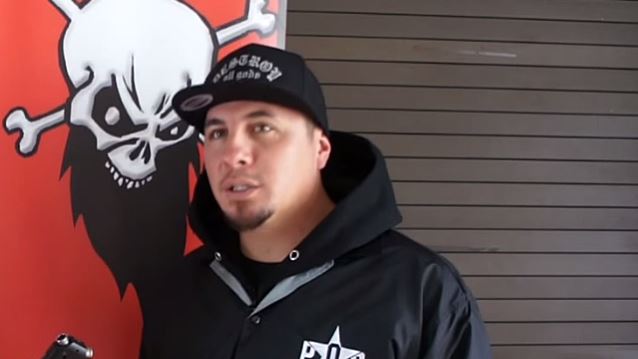 Christian hard rockers P.O.D. (PAYABLE ON DEATH) have set an August 21 release date for their new album, "The Awakening". The CD's first single will arrive later this month.

"We're excited about the new record," P.O.D. singer Sonny Sandoval told MikeJamesRockShow.com this past Saturday (May 10) in Plymouth, United Kingdom (see video below). "It's a conceptual record, so it's something different for us. It has a storyline to it. I mean, the songs… we love 'em. We had a chance to play a few new ones live."

P.O.D.'s last release was "SoCal Sessions", a collection of acoustic versions of some of the band's most popular songs. The CD came out last November.

A digital re-release of a special deluxe edition of P.O.D.'s latest studio album, "Murdered Love", was made available in October 2013. Highlights included two previously unreleased studio tracks, "Burn It Down" and "Find A Way" (recorded with Benson) and an acoustic version of the band's Top 5 hit "Beautiful". Additional tracks include an acoustic version of "West Coast Rock Steady", an alternate version of "On Fire" and "Lost In Forever (Scream)", plus various music videos and behind-the-scenes footage from the "Murdered Love" album cycle.