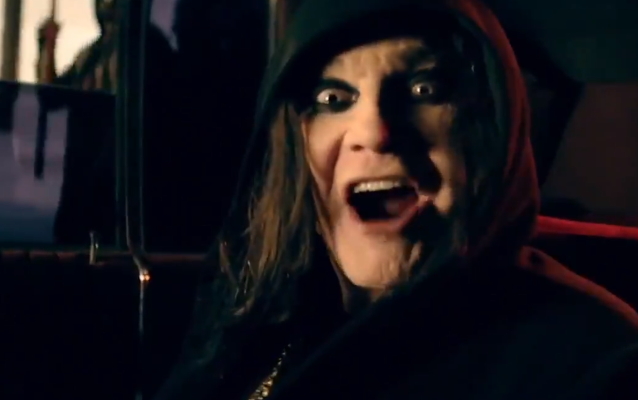 Ozzy Osbourne has released a teaser for his official music video for the song "Straight To Hell". The full clip will make its online debut on Monday, January 6.

"Straight To Hell" is the second single from Ozzy's forthcoming album, "Ordinary Man", which will be released later this year via Epic Records.

On the full-on rocker "Straight To Hell", Ozzy takes listeners to the heart of darkness — "something is missing and you don't know why" — with GUNS N' ROSES guitarist Slash along for this devilish ride, delivering scorched-earth riffs.

This past November, Ozzy released "Under The Graveyard", his first new solo music in almost 10 years, which garnered more than 2.8 million global streams in its first week. Rolling Stone noted "doom and gloom is what makes an Ozzy song great, and it's what make this one a keeper," and NPR wrote, "It sounds like Ozzy and, remarkably, Ozzy's voice can still tear through your soul."

"It all started when Kelly [Osbourne] comes in and says, 'Do you want to work on a Post Malone song?'" Ozzy explained. "My first thing was, 'Who the fuck is Post Malone?!' I went to Andrew's [Watt] house and he said we will work really quick. After we finished that song, he said, 'Would you be interested in starting an album?' I said 'that would be fucking great, but now I am thinking I don't want to be working in a basement studio for six months! And in just a short time, we had the album done. Duff and Chad came in and we would go in and jam during the day and I would go work out the songs in the evenings. I previously had said to Sharon I should be doing an album, but in the back of my mind I was going 'I haven't got the fucking strength...' but Andrew pulled it out of me. I really hope people listen to it and enjoy it, because I put my heart and soul into this album."

Osbourne's European tour will now take place in the fall of 2020.