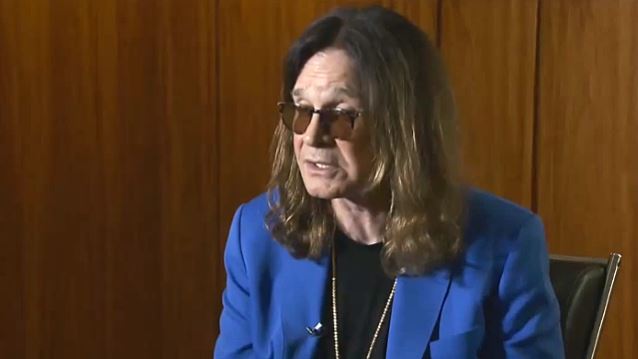 Ozzy Osbourne was interviewed by Brazil's Jornal Da Globo on April 24 — one day before his performance at the Monsters Of Rock festival in São Paulo, Brazil. You can now watch the Portuguese-language report below.

As previously reported, Ozzy will undergo surgery in May, forcing the singer to cancel his planned Ozzfiesta event scheduled to take place at the Hard Rock Hotel in Riviera Maya, Mexico from May 27 to May 31.

Ozzy told The Pulse Of Radio a while back that despite abusing his body for decades with drugs and alcohol, his overall health was good. "I went to my doctor a while ago and he says to me, 'Your liver's perfect, your blood's perfect, your heart's perfect, your kidneys are perfect...'" he said. "He says to me, 'You know what? You're a testament to what the human body can take.' You know, Keith Richards, he smokes, he drinks vodka like there's no tomorrow, he used to do heroin, you know, I don't know how that guy's sucking in air."

Osbourne still has two more dates in Brazil and one in Argentina scheduled for late April and early May.

Ozzy's only other confirmed live plans at the moment are two shows in Mexico in August, an October solo residency in Las Vegas and a late November concert in Japan.