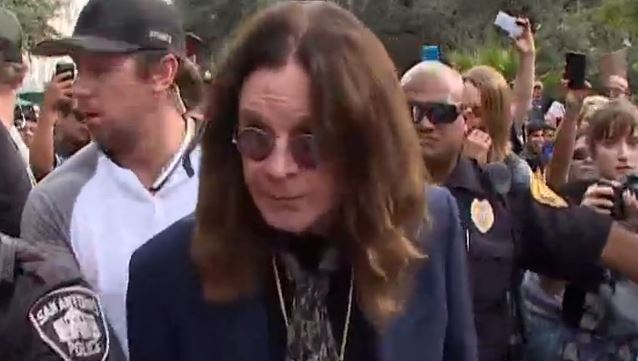 Ozzy Osbourne returned to San Antonio, Texas on Thursday (November 5) to apologize for urinating on the Alamo Cenotaph in 1982. The BLACK SABBATH singer visited the historical monument with his son Jack as part of their new show for the History channel.

According to Kens5.com, Osbourne was greeted at 4 p.m. by more than a hundred fans and onlookers, some of whom reportedly waited more than seven hours to just catch a glimpse of the so-called "Prince of Darkness." The singer was accompanied by a group of more than a dozen, including a camera crew, production assistants and security.

Prior to the Alamo visit, Osbourne met with local councilman Roberto Treviño, who said: "Certainly, as a city, we feel very, very good about his efforts to come to our great city and apologize for the actions of a not-so-sober person."

Ozzy allegedly urinated at the monument the night before his 1982 concert in the Texas city. The singer, who was wearing a dress at the time of his arrest — because his wife Sharon had hidden his clothes to stop him from going outside — apparently thought he was relieving himself on a pile of rubble. He was arrested for public urination and intoxication and was reportedly released on a $40 bond.

Ozzy was subsequently banned from ever playing in San Antonio again, but the ban was lifted 10 years later after Osbourne donated $10,000 to the Daughters Of The Republic Of Texas, who maintain and manage the Alamo, the mission that was the site of a famous battle during the state's War Of Independence in 1836. The site is considered sacred ground and a symbol of Texas pride.

The Osbournes' new show finds the father-son duo visiting famous places and offering what Ozzy described as "history with an Osbourne twang."

On the music front, Ozzy is scheduled to appear at Ozzfest Japan in Chiba, Japan on November 22. He will head out after that on a farewell world tour with BLACK SABBATH beginning on January 20, 2016 in Omaha, Nebraska.

Great look at the adoring crowd around Ozzy Osbourne at the Alamo from @mySAdowntown Details https://t.co/u8CZRoxF6R pic.twitter.com/821EsL8lkp

Ozzy Osbourne arrives in San Antonio to apologize for urinating on the Alamo https://t.co/R915fIyUjw @jbaugh pic.twitter.com/DmTjiTQEBF