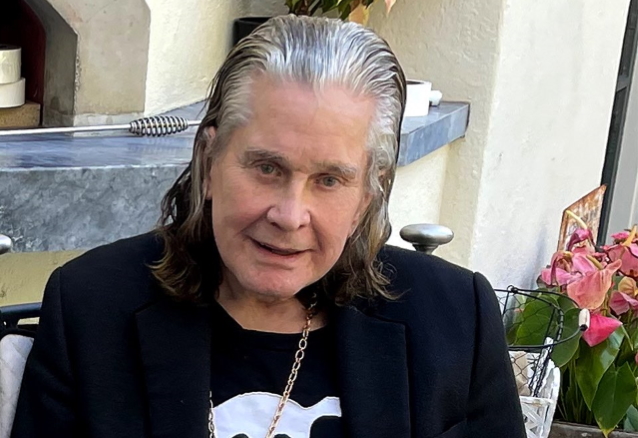 Ozzy Osbourne received his first dose of the coronavirus vaccine earlier this week.

The legendary BLACK SABBATH singer revealed he got the shot while appearing, alongside his wife Sharon, on the British talk show "Loose Women".

Ozzy, who turned 72 in December, told the "Loose Women" panel he had the COVID-19 vaccine on Thursday and the only side effect he suffered was a "sore arm." He went on to add he was "glad" he had gotten it and he was "absolutely relieved" as soon as the jab had been administered.

Noting that the virus has brought an "air of doom" to the world, Ozzy also spoke about how he felt when Sharon contracted the illness.

Ozzy explained he was "worried" about his wife, adding, "It's inevitable you’ll know someone who has had it before it's over.

"There's not a lot I could do. I just hope and prayed she didn't get really sick or even worse," he said.

Ozzy went on to admit that he would "struggle" without Sharon, saying his wife and manager was his "life."

Several days ago, Ozzy said during an episode of "Ozzy Speaks" on SiriusXM's Ozzy's Boneyard, that he was planning to get the COVID-19 vaccine as soon as he was able to.

"I look at it like this: if I don't get the shot and I get the virus, there's a good chance I ain't going to be here," he said.

Last November, Ozzy told GQ magazine that he suffers from a respiratory disease which puts him at an increased risk of severe pneumonia and poor outcomes if he was to develop COVID-19.

"I've got emphysema, so if I get this virus, I'm fucked," he said, referring to the type of COPD (chronic obstructive pulmonary disease) lung disease that makes it hard to breathe and gets worse over time.

Last July, Ozzy said that he was still "not back to 100 percent" after suffering from several medical issues in 2019, including a fall, neck surgery and hospitalization for the flu. Ozzy also said that he was looking forward to performing again once he has regained his health and the coronavirus pandemic has subsided.

In August, Ozzy blasted Donald Trump's coronavirus response, saying that America's 45th president was "acting like a fool." In an interview with Rolling Stone, Ozzy said: "In my lifetime, I've never known anything like this. It's getting worse, not better. And this guy's acting like a fool. I don't really like to talk politics that much, but I've got to say what I feel with this guy. There's not much hope left. Maybe he's got a trick up his sleeve and he's going to surprise us all, and I hope he has. [Recently], over a thousand more people died in one day [in America]. That's fucking crazy. People got to get with this social distancing and mask-wearing or else it's never gonna go away."

When the pandemic struck, Ozzy had just released his first solo album in a decade, "Ordinary Man", which he recorded in late 2019 while recovering from surgery and related illnesses. The BLACK SABBATH singer had previously canceled all his 2019 tour plans, and the rescheduled 2020 shows were also scrapped.