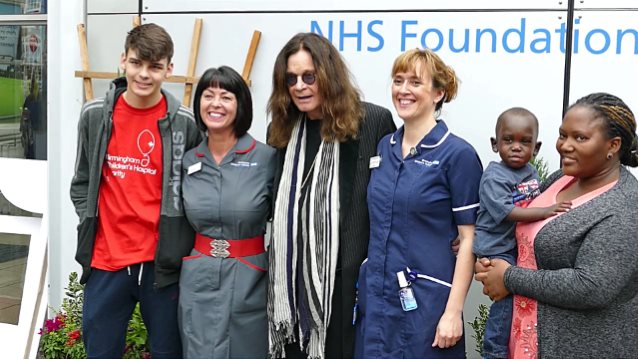 According to Birmingham Updates, Ozzy Osbourne visited Birmingham Children's Hospital in Birmingham, England on Thursday (May 26) in support of the bid to raise £3.65 million for the hospital’s Star Appeal, which will help build a pioneering Rare Disease Centre.

Ozzy said: "My son Louis was in Birmingham Children's Hospital for quite a while as a child and the staff took such good care of him, something which I will always remember.

"They do amazing work for kids and I'm really pleased to drop in and once again show my support for the Star Appeal. It'll be a national center that will help families not only in my hometown, but also across the country."

Yvonne Millard, Head of Nursing at Birmingham Children's Hospital, added: "It was such an honor to welcome the legend that is Ozzy Osbourne to our hospital.

"We are very proud that our new Rare Diseases Centre will improve the lives of thousands of families from across the U.K. and to have such a big star as Ozzy supporting it is just fantastic and a real boost for the appeal.

"It was a brilliant afternoon that helped put smiles on a lot of faces."

Ozzy last fall recorded a heartfelt video message to support the Big Hoot auction, which has raised hundreds of thousands of dollars for Birmingham Children’s Hospital.

Ozzy also contributed to the project with Ozzy's Owl, one of the 89 owl sculptures displayed around Birmingham for ten weeks. Graham Frank Wright painted the Owl for Ozzy, following the rocker's exacting instructions.