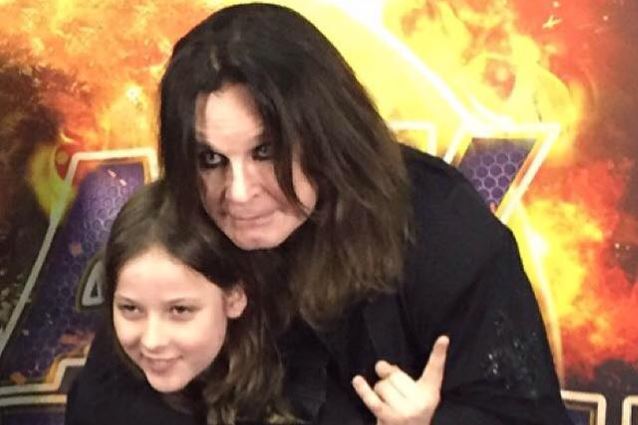 According to The Canberra Times, young Australian heavy metal fan Callum McPhie, who performed an Ozzy Osbourne song on the reality television talent show "Australia's Got Talent", got to meet the BLACK SABBATH singer before the band's concert in Sydney.

The 11-year-old, along with his dad Doug McPhie and mom Melissa Freeman also attended a soundcheck prior to the gig and sat in premium seats for the show at Sydney Olympic Park on April 23.

Ozzy's daughter Kelly, who is one of the judges on "Australia's Got Talent", arranged the VIP treatment after being impressed by Callum's performances on the program.

Ozzy gave Callum a hug and said he was well aware of the young guitarist's talent.

"He said he knew who I was and his daughter Kelly had told him all about me," Callum said.

"I felt absolutely, not shocked, just super-happy that Kelly had come through and let me meet Ozzy."

Several weeks ago, Kelly confirmed that she got her father to check out Callum's version of Ozzy's "Crazy Train". She said: "I showed my dad and he was in shock and he couldn't believe it."

McPhie's reaction was predictably enthusiastic. "I can't believe that, when I first learnt this song, one of the first songs I ever learnt, I never expected that Ozzy Osbourne might hear it. Wow."

The fast-tracked high school student recently told Fairfax Media he wanted to be an astrophysicist as well as a musician.