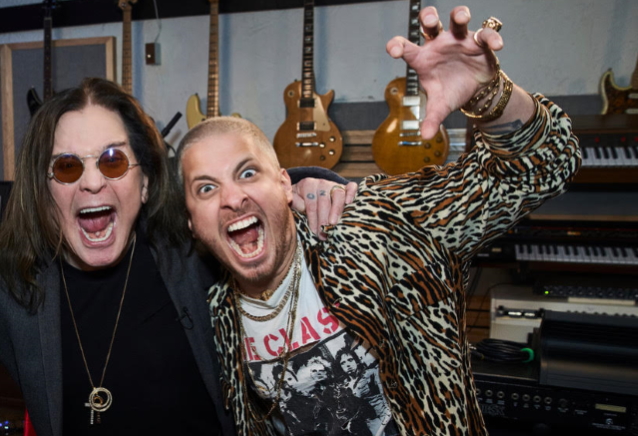 Producer Andrew Watt, who helmed Ozzy Osbourne's latest "Ordinary Man" album and is working with the legendary BLACK SABBATH singer on his follow-up effort, was asked in a recent interview with Marci Wiser of the 95.5 KLOS radio station to tell his favorite Ozzy story. He responded (as transcribed by BLABBERMOUTH.NET): "Some of 'em I don't think I can tell on the air. There's too many — too many. Every day is a story.

"During the pandemic, we were making this [new Ozzy] album," he continued. "I went over to his house. And he draws. He's actually a great painter and drawer. So I came over and I came and sat down. He was in the middle of drawing something, and he was using a lot of reds and stuff. So I was just talking to him as he was doing it. And he was drawing a bunch of circles and stuff like that. So he goes, 'Okay, cool.' I was, like, 'Where are we going?' He takes this big sheet of paper and walks outside with it, in his Ozzy walk, and puts it down in front of a tree. And then he goes, 'Okay, sit right here.' And he walks out with two BB guns. Ozzy holding two guns — I mean, anyone holding two guns — but Ozzy holding two BB guns is a scary thing. And the dogs are all in the backyard and everything. He's, like, 'All right. Let's shoot.' I'm, like, 'Hold on. Hold on. We've gotta get the dogs.' Me and one of the people that worked there are getting the dogs and [putting] them in the house. And he was shooting targets during the pandemic — he did not miss a single target. You think what you think — he just goes down to do it and, boom, perfect shot. Every single circle he hit — he hit 'em all. [He's a] pretty amazing man."

Watt connected with Osbourne after meeting Ozzy's daughter Kelly at a friend's party and pitching her on the idea of Post Malone and Ozzy collaborating together.

Six months ago, Ozzy told U.K.'s Metal Hammer magazine that he and Andrew had completed more than a dozen for his next studio LP. "My only concern right now is finishing the bloody thing," he said. "We've got the same production time as the last time, so there's definitely going to be some similarities. But you'll just have to wait and see what you think."

In December 2020, Watt told Guitar World that he and the BLACK SABBATH legend were "halfway through" the new LP. "There's some songs on there that are like eight or nine minutes long that are these really crazy journeys. I'm really excited about it," he said.

Like "Ordinary Man", which featured Watt on guitar, Duff McKagan (GUNS N' ROSES) on bass and Chad Smith (RED HOT CHILI PEPPERS) on drums, Ozzy's next album will feature guest appearances by a number of other notable musicians. "There's a bunch of people involved," Andrew told Guitar World. "I can't say for sure until the end, but I started doing a bunch of basic tracks with Chad and Robert Trujillo [METALLICA], who used to play in Ozzy's band. And Taylor Hawkins [FOO FIGHTERS] also came in and played a bunch on the record as well, which adds a different flair — it kind of harkened back to Ozzy's '80s era, in a great way. And I think it's so cool for a rock fan to be able to listen to half an album with Chad Smith on drums, and then you flip it over and you get to hear Taylor Hawkins. And you know, the last album was really special for everyone involved. And so there was no point in Ozzy or me doing this again unless we thought we could bring something new to the table. And I feel like we're achieving that."