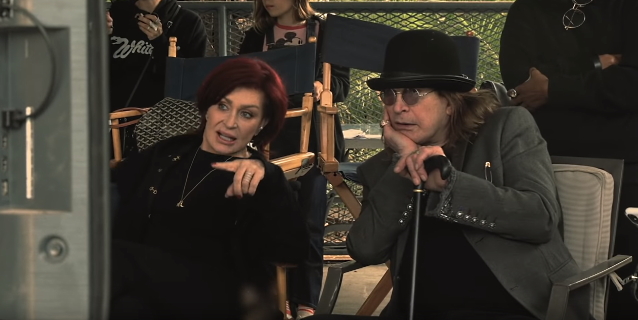 Behind-the-scenes footage from the making of the official cinematic music video for Ozzy Osbourne's single "Under The Graveyard" can be seen below. For the clip, the BLACK SABBATH singer re-teamed with acclaimed film director, screenwriter and music video director Jonas Åkerlund (who worked with Osbourne on videos for "Let Me Hear You Scream" and "Gets Me Through").

The semi-autobiographical video was filmed in Los Angeles and features actors Jack Kilmer (as Ozzy Osbourne) and Jessica Barden (as Sharon Osbourne). Set in the late 1970s in the early part of Ozzy's solo career, the clip shows the darkness of life and how a helping hand and love can change everything.

"For 'Under the Graveyard', Jonas developed the story into a 'mini movie,'" says Ozzy. "But, to be quite honest, it's hard for me to watch because it takes me back to some of the darkest times in my life. Thankfully, Sharon was there to pick me up and believe in me. It was the first time she was there to fully support me and build me back up, but it certainly wasn't the last."

"This album was a gift from my higher power — it is proof to me that you should never give up," Ozzy said. "It all started when Kelly [Osbourne] comes in and says, 'Do you want to work on a Post Malone song?' My first thing was, 'Who the fuck is Post Malone?!' I went to Andrew's [Watt] house and he said we will work really quick. After we finished that song, he said, 'Would you be interested in starting an album?' I said 'that would be fucking great, but now I am thinking I don't want to be working in a basement studio for six months! And in just a short time, we had the album done. Duff and Chad came in and we would go in and jam during the day and I would go work out the songs in the evenings. I previously had said to Sharon I should be doing an album, but in the back of my mind I was going 'I haven't got the fucking strength...' but Andrew pulled it out of me. I really hope people listen to it and enjoy it, because I put my heart and soul into this album."

This past October, Ozzy once again postponed his European tour, marking the second time the BLACK SABBATH singer has done so following a series of health issues.