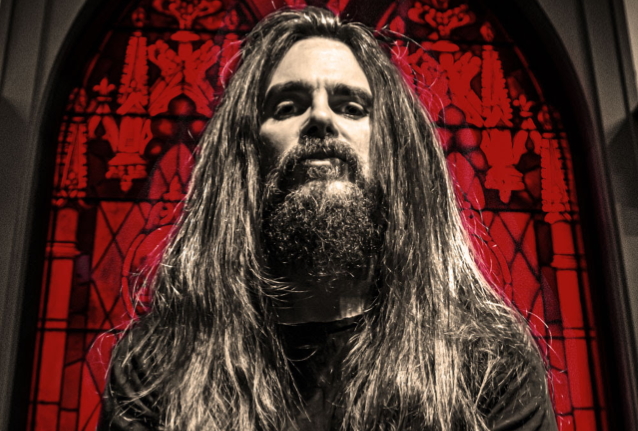 Ripple Music, one of the world's leading purveyors of doom and stoner rock, has names OZZY OSBOURNE bassist Rob "Blasko" Nicholson as its new executive vice president of A&R and special projects. A longtime connoisseur of the psych, stoner, doom, and heavy rock genres championed by the acclaimed Ripple Music roster and catalog, Blasko brings his extensive experience as a musician, manager, and curator to the California based label.

Blasko will work directly alongside Ripple Music cofounder and CEO Todd Severin to sign new artists and executive produce special projects with established acts in the newly created position. Concurrently, he continues his roles as bassist for the OZZY OSBOURNE band and manager for his roster of artists.

"I am thrilled to welcome Blasko to the Ripple Music team," says Ripple Music owner Todd Severin. "His impressive track record, experience, and knowledge reflect a deep commitment to artist development, a passion we share."

"Todd is a true innovator in the underground, and I hope to honor the Ripple Music legacy and contribute to its promising and ever-expanding future," adds Blasko. "I am privileged to participate."

Nicholson became a recording and touring musician at just 16 years old, first as bassist for seminal crossover thrash band CRYPTIC SLAUGHTER, which released three albums with Metal Blade Records from 1986 to 1988. After stints in a handful of major label projects and a short time with DANZIG, Blasko became the first bassist for ROB ZOMBIE following the dissolution of WHITE ZOMBIE. He recorded and toured behind "Hellbilly Deluxe" (three times platinum), "The Sinister Urge" (platinum), and the Billboard Top 5 album "Educated Horses".

Ozzy invited Blasko to join his band in 2005, where he's remained ever since. Around the same time, he laid the foundation for a boutique management firm whose roster now includes Zakk Wylde, BLACK LABEL SOCIETY and ZAKK SABBATH alongside CLUTCH, Grammy Award winners HIGH ON FIRE and gold-certified BLACK VEIL BRIDES. Blasko offers consulting and marketing work to a select number of businesses related to heavy music culture. He's also worked as a host and personality for music news outlets, radio stations, podcasts, and blogs.

Celebrating its tenth year in 2020, Ripple Music is the passion-driven imprint that leading heavy metal magazine, Decibel magazine declared "has made a splash in heavy rock and metal," and Alternative Control labeled "powerhouse taste maker". Metal Injection went so far as to predict, "they may very well be the future of rock and roll." Heavy hitters associated with Ripple Music include genre legend Scott "Wino" Weinrich, MOTHERSHIP, WO FAT, FREEDOM HAWK, MOS GENERATOR, desert rock progenitors YAWNING MAN, and many more.

In addition to the label, Severin oversees The Ripple Effect blog, Heavy Ripples Distro and Ripplefest events around the world. Ripple Music is headquartered in California's Bay Area. Blasko continues to live and work in Los Angeles.