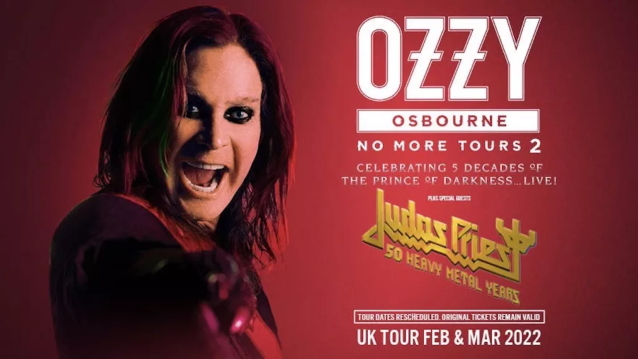 Ozzy Osbourne has once again announced the rescheduled dates for the European leg of his "No More Tours 2".

Due to the unprecedented and ever-changing situation, the six-week trek previously slated for October 2020 will move to early 2022. The rescheduled 19-date arena tour, with lifelong friends JUDAS PRIEST as special guests, will kick off on January 26, 2022 in Berlin, and includes a brand new date in Hungary, at the Budapest Arena, which will not include the Rob Halford-fronted outfit. Fans should hold on to their tickets as they remain valid for all rescheduled tour dates, and refunds must be sought at point of purchase.

"I really want to thank my fans for their loyalty and for waiting for me," Ozzy said in a statement. "Believe me, I can't wait to see you all again. Please stay safe in these uncertain times. God bless you all! Love Ozzy."

This past July, Ozzy said that he was still "not back to 100 percent" after suffering from several medical issues last year, including a fall, neck surgery and hospitalization for the flu. Ozzy also said that he was looking forward to performing again once he has regained his health and the coronavirus pandemic has subsided.

When the pandemic struck, Ozzy had just released his first solo album in a decade, "Ordinary Man", which he recorded late last year while recovering from surgery and related illnesses. The BLACK SABBATH singer had previously canceled all his 2019 tour plans, and the rescheduled 2020 shows have also been scrapped.

This past May, Ozzy's son Jack said that his father will "probably" retire "within the next five to ten years." But Ozzy, who turned 71 last December, has repeatedly said that he is not calling it quits, despite the fact that his "No More Tours 2" — whenever it ends up happening — is being billed as his last major global trek.

Ozzy was also forced to cancel an April trip to Switzerland to see a doctor who specializes in treatment of Parkinson's disease. The singer revealed earlier this year that he was diagnosed with the condition.