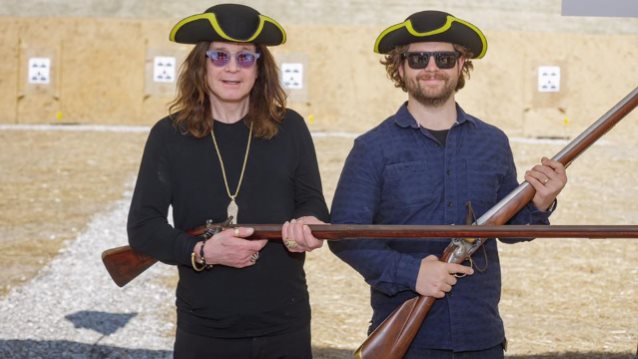 T-Group Productions has uploaded a trailer for "Ozzy & Jack's World Detour", the new show produced by the History channel starring Ozzy Osbourne and his son Jack.

"Ozzy & Jack's World Detour" is set to kick off July 27 at 10 p.m. and will feature the duo traveling the world together, exploring the history behind some of the planet's most storied sites, while checking out some lesser known locations along the way.

In this new ten-episode hour-long non-scripted series, the self-proclaimed history nerds hit the road in a father-son journey they've waited years to take. There will be no roadies, no tour buses and no boundaries. Just a bucket list of iconic and historically significant spots that includes Mt. Rushmore, Stonehenge, The Alamo, Roswell, The Jamestown Settlement and Sun Studios and a hit list of some fascinating sights and people that they've read about. From a Cold War-era Missile Silo to Bletchley Park; from gold miner Rattlesnake Randy's stream of dreams to vintage tank collector Allan Cors's private museum of working war machines, Ozzy and Jack get their eyes and hands on history.

Ozzy in November returned to San Antonio, Texas as part of the History channel program — to apologize for urinating on the Alamo Cenotaph in 1982. He was also spotted around Roswell, New Mexico, where he and Jack visited the International UFO Museum, and they traveled to Cuba, where they spent almost a week.

On the music front, Ozzy recently completed the first North American leg of BLACK SABBATH's farewell tour, dubbed "The End", and is currently headlining European festivals with the band.